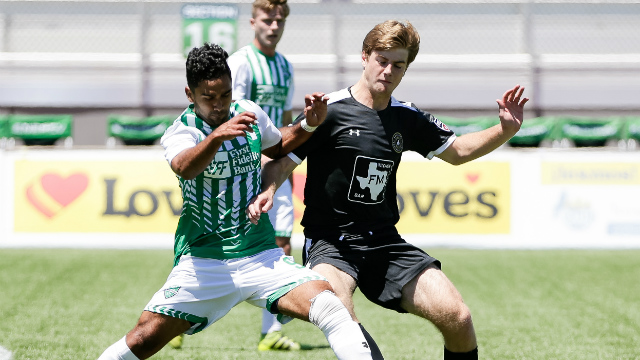 The USL PDL season is winding to a close, with the penultimate weekend of action slated for the conference semifinals and finals.

The field of 16 will be quickly whittled down to four, as the championship will take place with two games in two days, stretching from Friday through Sunday. Even as the preseason nears, college soccer standouts will be front and center in the efforts for each team to progress.

Here's a preview of this weekend's Conference Championships.

Overview:
The defending champions host this weekend’s Central Conference clash, facing a difficult task of besting a trio of quality opponents. Michigan has a formidable spine, even if it’s not quite at the same level as last summer. Alexi Souahy and Nick Walker have appeared in every game this summer at the back, providing plenty of talent to call upon. They’ll need to best a Menace side that finished in second place in the Heartland Division. The other side of the bracket features two tough Canadian sides. K-W United brings championship pedigree of its own, winning the 2015 PDL title, and Thunder Bay Chill are always near the top of the PDL table.

College Players to Watch:
M Brad Dunwell, Michigan Bucks (Wake Forest) - The most underrated player in college soccer has a pro future. The holding midfielder can dictate play from his deep-lying central positions in front of this back four.

F Adam Abdellaoui, Thunder Bay Chill (Georgia Southern) - A rising senior, Abdellaoui has setup far from his Georgia home to compete for the Chill. He leads the team with five goals, coming into form ahead of his final year of eligibility.

GK Dayne St. Clair, K-W United (Maryland) - While it’s hard to know who might suit up in goal at this point of the season, St. Clair’s an intriguing prospect with the size and youth national team pedigree to excel at this level. If he’s in goal for United, it will be a big boost for his team’s chances.

Overview:
Both Seacoast United and Long Island advanced to the Conference Championships with Tuesday wins, as the former defeated Reading United and the latter upset the Mid-Atlantic Division winners New York Red Bulls U23s. Those two winning siders are joined by the Mutiny and Charlotte Eagles down in Statesboro. It’s an interesting blend of talent backgrounds, as Myrtle Beach features a number of ex-Coastal Carolina players, while

College Players to Watch:
F Donnett Sackie, Seacoast United (Utah Valley) - While he’s a long way from Utah, Sackie’s been a consistent force up front for United this season. The forward has nine goals and four assists in 13 games.

D Andre Morrison, Long Island Rough Riders (Hartford) - A key defender that will look to slow down Sackie, Morrison is one of Long Island’s leaders in minutes played this season.

GK James Pyle, Charlotte Eagles (North Carolina) - Taking over the starting role in goal over the past few games for Charlotte, Pyle’s an excellent shot-stopper and was consistent last fall for UNC.

D Yuta Yamamoto, Myrtle Beach Mutiny (Lindsey Wilson) - A consistent performer at the NAIA program over the past two seasons, the Japanese defender steadies the back line for the Mutiny. He’s played in 11 games this year, logging more than 900 minutes.

Overview:
PDL newcomers from Montverde Academy look to crash the party in a quartet of quality teams that each can stake a claim at a conference crown. FC Miami City tends to rely on an older, more grizzled group of veterans, while OKC Energy and Aguilas trend slightly younger. The Energy might be the favorites in this one, even if they don’t get to host proceedings.

College Players to Watch:
M Rafael Santos, SIMA Aguilas (VCU) - One of college soccer’s most talented players, staying fit has held Santos back from flourishing on the field at VCU. He’s played in 12 games this summer for the Aguilas, chipping in three assists.

D Jordan Skelton, Mississippi Brilla (Lander) - The English defender from a Division II program has provided consistent minutes for the Brilla in 2017. He’s second on the team in minutes played with 1,170.

GK Eric Dick, OKC Energy U23 (Butler) - While UNC Wilmington standout Julio Moncada is one of the keys offensive, an in-form goalkeeper is just as valuable, especially when it comes to knockout soccer. Dick’s a seasoned veteran of the Big East and shown his quality in the past.

D Malick Mbaye, SIMA Aguilas (Clemson) - A dominant defender at Clemson in the fall, Mbaye’s is among a slew of returnees to Montverde this summer.

Overview:
Four talented teams head to Tucson, with potential for three dazzling matchups on the slate. The Timbers captured the Northwest Division title, riding the strength of an impressive goal-differential to edge Calgary Foothills FC for first place. Portland’s conceded the fewest goals in the Western Conference, a vital strength that could propel them to the PDL Semifinals. Opponents FC Golden State score at nearly a three-per-game clip, sitting on 45 goals in 14 games. That’s the same mark achieved by Fresno Fuego, another high-scoring team that battles the hosts on Friday night. Fresno’s a side that fields ex-pro players up and down the roster, handing them the experience advantage this weekend.

D Wouter Verstraaten, Portland Timbers U23 (Pacific) - Several defenders have enjoyed solid seasons from the college ranks, and the Dutch product Verstraaten is one of them. He leads the team in 2017 with 1,205 minutes played.