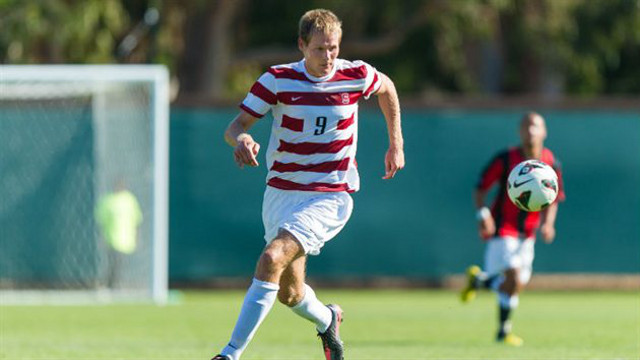 With the NCAA tournament here, it’s officially time to start thinking about the draft. We’ve kept a close eye on the top pro prospects this season in college soccer, and as next year draws near, so does the next MLS SuperDraft.

Keeping that in mind, below is a ranking of 35 of the best seniors who will be available in the draft, broken down by position.

Adding another unique element to the draft is the MLS homegrown rules. It remains to be seen what players will be eligible to sign directly with a club because of their graduate status with an MLS Academy. Players who are graduates (at least from our understanding), and could sign are denoted with a * after their name.

1. James Belshaw, Duke: The Blue Devils keeper reads the game well and is capable of the athletic save from time to time. He does have a strike against him though as an international from England. 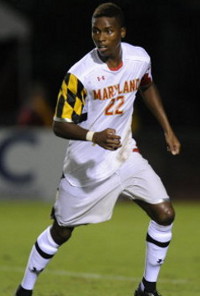 2. Luis Soffner, Indiana: The Hoosiers leading man made 70 saves in his final collegiate regular season while only conceding 16 goals. Soffner started all four seasons in the net for Indiana.

3. Larry Jackson, Santa Clara: The West Coast Conference Goalkeeper of the Year had a terrific season with 60 saves and a 0.85 goals against average while picking up an 11-5-1 record.

4. Scott Goodwin, North Carolina: Goodwin’s experience is more valuable than his stats portray. The Tar Heels starter for three seasons has been in plenty of big game situations and continually met the occasion.

5. David Meves, Akron*: The Zips netminder has enjoyed his best season in college, winning games for Akron and showing what he could be capable at the next level. Meves has ties to Chicago’s Academy, though it’s hard to know if he’ll fall into the draft.

1. London Woodberry, Maryland*: The FC Dallas Academy product isn’t great with the ball at his feet, though he has the speed, athleticism and size to play significant minutes right away along an MLS back line.

2. Chad Barson, Akron*: A stalwart at the back for the Zips over the last few years, it seems pretty certain that Barson will get signed by the Crew. He has the tools to get things done at the next level.

3. Steve Birnbaum, California: There is strong likelihood that California and Birnbaum will apply for a red shirt after only playing 15 minutes this season. The senior center back was injured in the first game of the season against Houston Baptist. In the outside chance that he does enter the draft, Birnbaum’s resume over the past three years should be enough to convince almost every team to give him a look.

4. Matt Wiet, UCLA*: The Bruins center back is another potential homegrown signing for the Columbus Crew. Wiet has been a solid piece of the Pac-12 Champions defense over the past few seasons. He has potential to develop into an everyday starter if given the time.

5. Jack Bennett, St. John's: The Tyler Junior College product has transitioned well to the Division I game over the past two seasons with St. John’s. This season Bennett was utilized as a center back, but he has the technical ability to play in the center of the field as well.

6. Tommy Muller, Georgetown: Size is the issue with Muller here, a three-year starter who is very good on the ball, has decent speed, and reads the game very well. How his 5-foot-11, 168 pound frame can adapt to the next level is his biggest concern. Best case scenario is that he’s another Michael Parkhurst -- great at keeping himself in the right position at almost the right times, although it’s not known if he can play as an outside back as well.

7. Eric Schoenle, West Virginia: It hasn’t been the greatest year for Schoenle and his West Virginia side, though the center back led his team in goals scored. Perhaps his biggest shortcoming is a lack of bulk, and his ability to cope with that is going to dictate his professional success.

8. Jimmy Nealis, Georgetown: An adventurous left back, Nealis has thrived this season playing for a Georgetown team that likes to keep the ball. His defensive abilities, for the most part, weren’t frequently tested as a result, and he’ll need to show discipline in that capacity to become an MLS contributor.

9. Joe Franco, Cal State Northridge: The Big West Defender of the Year was an under the radar prospect for much of the season, but Franco really put his name on the map in the second half of the season. With a highlight reel performance against UCSB, Franco showed he can take on next level talent consistently.

10. Taylor Kemp, Maryland: The left back hasn’t enjoyed much luck with injuries this year, but he’s an attacking back with good experience and strong defensive ability. Likely to slip down the draft boards because of his struggles, he could end up as a sleeper because of his nagging knocks.

1. Jose Gomez, Creighton: Gomez sees the game at a different level than most college players, which should be a blessing in MLS. He plays (and thinks) at a speed a step quicker than the average player. Over the past three seasons, he has dictated the game from the midfield at Creighton, which is heading on 18 drafts with at least one player selected.

2. Scott Caldwell, Akron*: The engine that makes Akron tick this season, the New England Revolution Academy product is almost a lock for a homegrown contract. The Revs will get a player extremely comfortable with the ball at his feet, and someone who can pick apart the opposing defense with his passing ability, plus he knows how to finish on front of goal.

3. Dillon Powers, Notre Dame: Fewer players probably have attracted as much buzz as Powers and stayed all four years of a college career. However, that looks like it will pay off for Powers, who is a box-to-box midfielder with good speed, range and passing ability. Finally healthy, he’s shown how dangerous he can be when he gets a steady run of games, and is one of a handful of players ready to jump into MLS action.

4. Carlos Alvarez, Connecticut: Like Gomez, we’ve seen players like Alvarez before -- quality attacking midfielders in college, but unable to transition to MLS. Alvarez doesn’t really have the pace for the flanks in the pros, so in order for him to find a spot in MLS, a coach needs to bring him in and truly trust him as an attacking midfielder. He’s got the passing and vision to excel, but might be better suited in a league that embraces his technical strengths.

5. John Stertzer, Maryland: Any four year player at Maryland with Stertzer’s resume is going to warrant attention, and the central midfielder is no different. He plays more of an advanced role on a team that likes to attack, but it’s clear that Stertzer has the passing ability to make it in MLS. The question will be how his defending comes along, as he’ll likely play a deeper role at the next level.

6. Ryan Hollingshead, UCLA: The Pac-12 Player of the Year has the cut to deal with the MLS physicality for the first day of practice. He plays on the wing for UCLA, but he could find a better role defensively.

7. Blake Smith, New Mexico: The elusive winger from the Lobos has been the main setup man in the MPSF this season. Smith has three goals and 13 assists in 19 games.

8. Ian Christianson, Georgetown*: One of the reasons that the Hoyas are enjoying a fantastic season, is the determined play of Christianson, a deep-lying, left-footed midfielder who can do all of the little things: win balls, connect the back line and the attack, plus he’s got a pretty good shot on him. A Fire Academy graduate, it would be surprising to see him slip into the draft.

9. Kyle Bekker, Boston College: Another attacking midfielder, both Bekker and his BC side have struggled with injuries. As a result, the Canadian’s draft stock isn’t nearly high as it could be at this point in the season. A very technical player, he can create and score goals in impressive fashion. Even if he’s asked to play out wide, he has the pace and speed to cope with that task.

10. Machael David, UC Santa Barbara: David saw his stock drop rapidly during the season as injuries once again kept him off the field. The bad luck with the knocks is only one part of the negative list against the Gauchos general. David is also older than most in the draft and an international player, and he’ll have to overcome both of those stigmas.

1. Chris Thomas, Elon: The nation’s leading scorer is sure to attract a lot of attention this draft class, and based off his entire body of work, could end up being the top forward from this group if he ends up in the right position. With good speed, size and athletic ability, he can make game changing plays as a rookie.

2. Ryan Finley, Notre Dame: Do you use a first round pick on a player who has not started a college game in a year? How much does the moniker of supersub influence draft day decisions? These are the type of questions that will be asked about Finley in the coming weeks, as the striker from Notre Dame has not started a game this season, but continues to find success off the bench.

3. Will Bates, Virginia: Injuries derailed a potential Generation adidas deal for Bates last year, and he recovered to finish strong as a senior. A lack of supporting cast around him meant the opposing defenses keyed on him, diminishing his scoring return somewhat, although he has the size, strength and ability to not only win a spot on an MLS roster, but also see minutes as a rookie in 2013.

4. Erik Hurtado, Santa Clara*: The Timbers are trying to claim Hurtado, but it is not a slam dunk case for his rights to be awarded to Portland. If he is available in the draft, he is a speedy winger who did not get enough national attention while playing in the WCC. He could be a dangerous weapon in the attack at the next level.

5. Emery Welshmen, Oregon State: The Canadian has the tools to play at the next level and should get a long look from the three teams north of the border. His pace is his main weapon, as he is deceivingly quick with his first step.

6. Ashton Bennett, Coastal Carolina: Coaches love speed, and that’s what Bennett brings in spades. But he’s also picked up a reputation of not having the greatest attitude, a warning sign for many at the next level.

7. Donnie Smith, Charlotte: An all-action forward, Smith’s is listed there by his school but is more likely to end up playing in a left side role in the pro ranks. A player with good size and speed, he troubled North Carolina during last year’s title game, and will look to help Charlotte on another deep run in the tourney.

8. Devon Sandoval, New Mexico: The target forward for New Mexico can fill a very specific need for a team. He is physical and powerful. He is capable of holding off a defender with his back to the goal.

9. Adam Jahn, Stanford: Listed at 6’3, Jahn is one of the taller players from this draft class. He is a weapon in the air with his ability to get on the end of crosses, but he may need a bit of work with his foot speed to get MLS-ready.

10. Charlie Rugg, Boston College: While this quick striker lost a lot of his season to injury, if he’s healthy come draft time, Rugg might be another steal, as he’s a good finisher who can get on the end of a lot of chances and has the pace to stretch defenses.