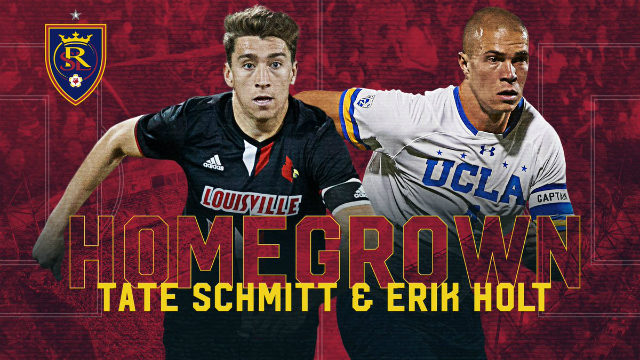 Tate Schmitt and Erik Holt won't have to wait until the MLS Draft to learn their professional future.

Ths seniors from Louisville and UCLA signed Homegrown deals with Real Salt Lake, according to a Thursday afternoon press release.

“We know that Tate and Erik are players that would be first round selections if they entered the draft. Having the ability to sign both as RSL Academy graduates is another step in following our youth development philosophy while giving both the ability to develop into first team players over time,” RSL General Managed Craig Waibel said in a statement. “They both had remarkable college careers and we are excited about what the future holds for them here at the club.”

Schmitt earned Second Team Best XI honors from TopDrawerSoccer.com after a stellar senior campaign that saw him score five goals and add eight assists. Across his four seasons with ACC powerhouse Louisville, he made 80 appearances, scorign 26 goals and adding 17 assists.

“I’m very excited to have signed my first professional contract with Real Salt Lake and it’s a very proud moment for myself and my family,” Schmitt said in a release. “I’m very fortunate that I came into the RSL organization as a 16-year-old and developed the foundation to learn and grow as a young player at a high level. To be able to build relationships with some of the guys currently playing with RSL at the Academy really inspired me and motivated me to reach the professional game.”

A 6-foot-1 defender that can also play as a holding midfielder, Holt played 71 games at UCLA, earning All-Pac-12 honors in three of his four seasons in Westwood.

“It’s been a really exciting experience to be able to fulfill the dream of becoming a professional soccer player,” Holt said in a statement. “I started with RSL in Casa Grande, Arizona and it’s been an incredible experience to be able to play at one of the best academies in the country then move onto UCLA. Now to be back with RSL at the professional level is incredible. I can’t wait to get started.”