Seminoles #1; DiBernardo Player of the Week 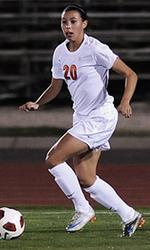 New teams in the ranking this week include La Salle as an At-Large and Cal Poly (Big West), Samford (Southern), Hartford (America East) and Alabama State (SWAC) as the projected winners of their respective conferences.

Meanwhile, Vanessa DiBernardo of Illinois is our TopDrawerSoccer.com Women’s College Soccer Player of the Week after she helped the team to a 3-2 win over Michigan State with a fantastic hat trick. The honor, along with the 11-player Team of the Week, is awarded each week after a review of match reports through DI Women’s Soccer.

GK: Che’ Brown, Radford – Recorded 12 saves overall in a pair of shutout wins for the Highlanders.

D: Rachel Quon, Stanford – Played 180 minutes in the back line and recorded a pair of assists as the Cardinal won a pair of matches on the weekend.

D: Brittany Von Rueden, Notre Dame – Recorded three assists in two matches along with a strong performance in the back line.

D: Mary Kroening, Georgetown – Played every minute in the back for Georgetown’s two matches, and scored the winning goal against Cincinnati.

M: Sarah Killion, UCLA – Played 183 minutes in midfield and scored on a direct kick to help the Bruins to a pair of Pac-12 victories.

F: Cortlyn Bristol, William & Mary  – Tallied 4 assists to help the Trible to a pair of wins.

F: Sarah Halverson, San Diego State – Came off the bench to Score the winning goal in both of the Aztecs’ wins this week

F: Laura Weinberg, Duke – Scored 3 times and added an assist as the Blue Devils won a pair of matches.