Seminoles #1; Williams Player of the Week A pair of road wins in the Atlantic Coast Conference have kept Florida State undefeated and #1 in the TopDrawerSoccer.com Tournament 64 National Ranking, updated today 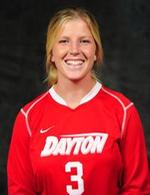 New teams in the ranking this week include Michigan State as an At-Large and Miami (OH) as the projected winner of the MAC.

The complete women's college soccer ranking can be found here.

Meanwhile, Dayton’s Colleen Williams is our Women’s College Soccer Player of the Week after she helped the team to wins over Rhode Island and Massachusetts with 4 goals and 4 assists. In the process, Williams tied the school’s career goals record at 52. The honor, along with the 11-player Team of the Week, is awarded each week after a review of match reports through DI Women’s Soccer.

D: Emi Lawson, California – Played 180 minutes in the back line as the Golden Bears picked up a pair of important Pac-12 victories.

D: Marissa Diggs, UCF – Went 180 minutes in the back line as UCF posted a pair of shutout wins.

F: Colleen Williams, Dayton – Scored 4 goals and added 4 assists as the Flyers won a pair of contests in Atlantic 10 action.