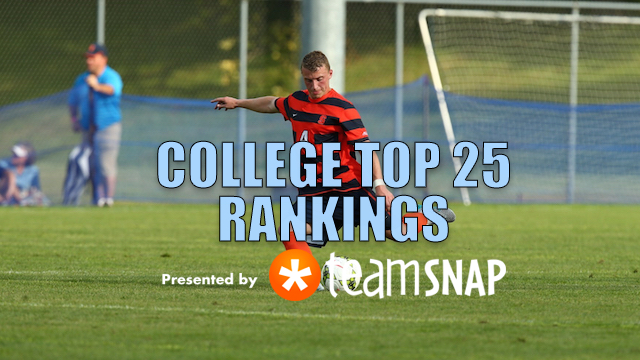 The second weekend of the college soccer season hit a snag early on when No. 1 North Carolina was held out of action due to weather conditions on Friday night in the Tar Heel State. The top ranked squad keeps hold of that spot this week as the contenders did not do enough to jump the ACC powerhouse.

No. 2 Maryland picked up wins over Hartford and Georgetown last week. The Terps defeated Hartford 5-0 and then squeaked past the winless Hoyas 2-1. Maryland is back in action on Monday with a game against South Florida and then the Terps open up league play on Friday against No. 4 Indiana.

Syracuse jumps up to No. 3 thanks to San Diego State’s 1-0 win over Akron on Friday. The Orange is 4-0 on the season after a win over St. John’s on Sunday night.

Indiana moves to No. 4 after finishing 1-0-1 at IU Classic this past weekend. The Hoosiers picked up awin over California and played to a scoreless draw against Stanford.

Clemson rounds out the top five. The Tigers defeated Creighton 1-0 on Friday in one of the best match-ups of the weekend. Clemson has a big test ahead though with North Carolina on the schedule for Friday.

Check out the full TopDrawerSoccer Men's Division I Top 25.