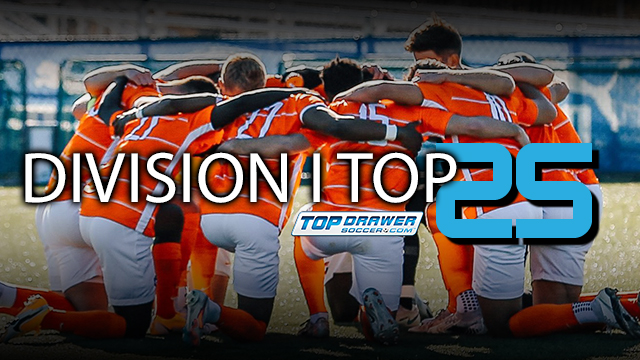 With Georgetown drawing away from home against Providence (one of the new entrants in the Top 25), Clemson now sits as the No. 1 team in the TDS Top 25. The ACC side returned to action at home on Sunday, easily defeating Syracuse by a 3-1 score. Clemson will be without Philip Mayaka and Kimarni Smith for the spring portion of the season, however.

Several other ranked teams lost as the men's DI schedule continued. SMU lost 2-0 on the road to Temple, Pittsburgh suffered a 3-0 defeat against North Carolina in Chapel Hill, and Kentucky lost its Conference USA opener in overtime, a 2-1 result against Charlotte at home. Oral Roberts, Ohio State, Missouri State and Seton Hall edged into this week's rankings.

On the women's side, changes were much more minimal at the top. Florida State and North Carolina remain idle in regard to competitive games, although the former played an exhibition against Florida and the latter squared off against North Carolina Courage. UCLA remains the No. 3 team, defeating both Oregon schools in Westwood over the weekend to continue a strong start to the spring campaign. Pac-12 peer California suffered a first loss of the season against Colorado to drop out of the Top 10.

Arizona State and Georgetown are this week's newcomers to the Top 25.