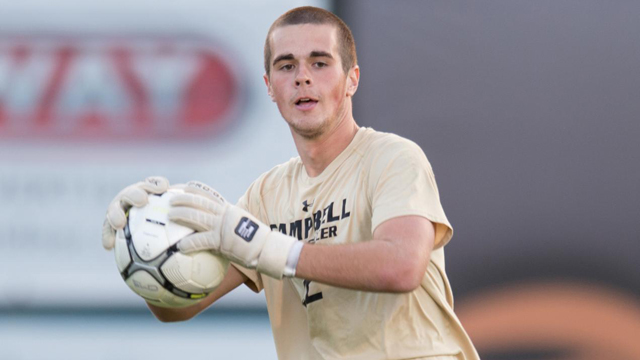 The men’s college soccer season kicked off over the weekend and many teams rolled into the campaign with a pair of games. Scattered throughout the hundreds of results were a number of quality individual performances, which helped respective teams capture results.

Below is the TopDrawerSoccer men’s college soccer Team of the Week and Player of the Week for games between Aug. 29-31.

GK Matt Mozynski, Campbell – The redshirt freshman goalkeeper had a dream debut on Friday for the Fighting Camels. Mozynski recorded the shutout and victory on the road against UNCG. He made 10 saves on the night including a penalty kick save in the second half, which was one of eight saves he made in the second half.

D Jordi Lluch, Winthrop – The junior defender was a key piece for the Eagles 2-0 start to the season. Lluch helped shut down the potent Wofford attack on Friday in a 1-0 win for the Eagles. He followed that up with another quality performance on Sunday in a 3-1 win over Georgia Southern.

D Grant Lillard, Indiana – The freshman defender was named to the adidas/IU Credit Union Classic All-Tournament team after helping the Hoosiers a 1-0-1 record over the weekend. Lillard was a key piece for the Indiana defense on Friday in a 1-1 draw against Georgetown. He followed that up with a strong showing against Marquette on Sunday in a 1-0 win for the Big Ten side.

D Edgar Contreras, UCLA – Contreras played 180 minutes at defense for the Bruins over the weekend. He was a key piece to UCLA only letting in one goal against Wake Forest and North Carolina.

D Zachary Carroll, Michigan State – Carroll helped anchor two shutouts in his first two games with the Spartans. He also scored in a 3-0 win over FIU on Sunday. Carroll made life easy on Zach Bennett who only needed to make five saves between the two games.

M Sean Davis, Duke – Davis collected the MVP honors from the 2014 John Rennie Nike Invitational after the Blue Devils went 1-0-1 at the event. Davis had three assists on Sunday in Duke’s 8-2 victory over Stetson. He played 110 minutes on Friday in a 1-1 draw against Loyola Marymount.

M Andrew Brody, Louisville – The sophomore midfielder scored the game-winner against Maryland on Friday. Brody’s header allowed the Cardinals faithful to leave the debut game at Lynn Stadium with a big smile.

M Brandt Bronico, Charlotte – Bronico had a goal and an assist for the 49ers in a 2-1 win over Radford on Sunday. Bronico’s contributions throughout the game helped Charlotte see out the win against the visitors.

F Ricardo Lopez-Espin, Creighton – Lopez-Espin started his collegiate career with game-winning goals in his first two games. He set a pretty high bar for himself moving forward. The Creighton forward ended the weekend with two goals and an assist as the Big East squad improved to 2-0 on the campaign.

F Timi Mulgrew, George Mason  - Muligrew scored three goals and added an assist in a 7-0 win over Howard on Friday. He followed that up with the game-winner on Sunday in a 1-0 victory over American as George Mason opened the season with a 2-0 record. He was one of three players from George Mason to make the #Kuykenstrong D.C. College Cup All-Tournament Team.

F Salvador Bernal, UNLV - Bernal recorded his first collegiate hat trick in a 4-3 win over Bradley on Sunday. It was the first hat trick from a UNLV player since 2001. He topped off his outing with an assist on the game-winning goal. The Running Rebels are off to a 2-0 start to the season.