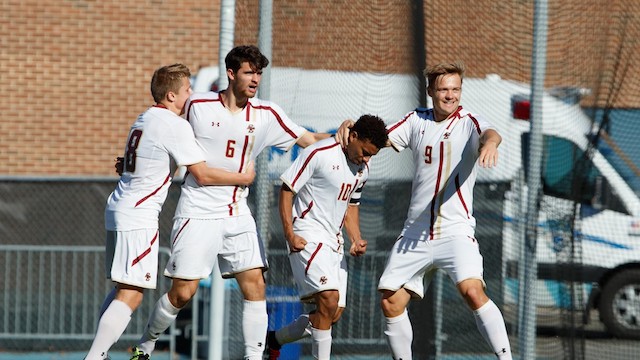 With conference tournaments and regular season finales, there were a number of great individual performances that kept postseason dream’s alive last week. TopDrawerSoccer highlights Boston College star Zeiko Lewis’ past week as he led his team into the semifinals of the ACC tournament with a pair of superb performances.

Lewis earned the honor as TopDrawerSoccer Player of the Week.

GK Jake McGuire, Tulsa - McGuire made eight saves in Tulsa’s 2-0 win over Memphis in a crucial AAC battle on Friday. McGuire helped guide the team to the victory in the conference battle.

D Jimmy Fiscus, Michigan State - Fiscus scored the game-winner against Penn State in the Big Ten tournament on Sunday. He led the defensive effort that only allowed one shot on goal in the game.

D Wouter Verstraaten, Pacific - The Pacific defender registered an assist on the lone goal in Pacific’s 1-0 win over Portland, which kept the WCC battle alive for another week. Verstraaten helped Limit Portland to only four shots on goal in the game.

D Elan Koenig, Wisconsin - Koenig scored a goal in Wisconsin’s 3-0 win over Ohio State in the Big Ten tournament last week. The freshman defender helped shut down the Buckeyes attack in an impressive showing from the Badgers.

M Zeiko Lewis, Boston College - The midfielder came up big last week with two goals in a 2-2 draw against Virginia Tech. He converted his shot from the spot in the PK shootout, which Boston College won to move onto the next round of the ACC Tournament. Lewis then scored the only goal in Boston College’s upset win over North Carolina.

M Lewis Suddick, Butler - Suddick scored both goals in Butler’s 2-1 win over Xavier in Big East play. Suddick’s second goal, the game-winner, came with Butler playing down a man after a red card.

M Dale Ludwig, American - It was a good week for Ludwig. On Saturday, Ludwig scored twice in American’s 3-1 win over Lehigh. On Monday, he was named the Patriot League Midfielder of the Year. Not a bad few days.

F Jordan Jones, Oregon State - Jones scored two goals in the big win over San Diego State last week in Pac-12 play. He followed that up with a goal against UCLA on Sunday in the close battle between conference foes.

F Albert Ruiz, Florida Gulf Coast - Ruiz’s two goals helped FGCU beat Lipscomb in the A-Sun semifinal last week. The forward has 19 goals this season as he found the back of the net twice in the 3-2 double overtime win.