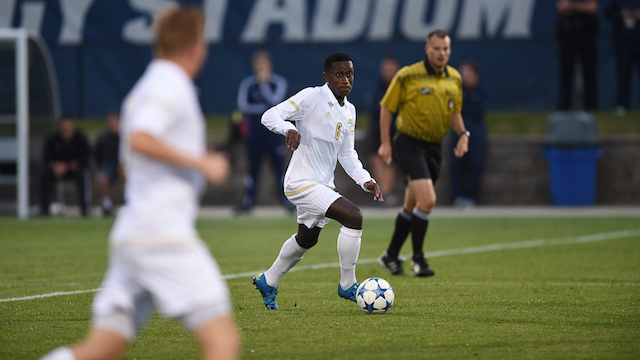 There were a number of upsets in men’s Division I soccer over the weekend. Some of those upsets came thanks to a few brilliant individual performances. Standing out in the spotlight helped a number of players earn spots on the TDS Team of the Week. Check out who made the cut below.

GK Matt Bersano, Penn State - The Penn State goalkeeper saved a penalty kick on Sunday to help the Nittany Lions secure a win in their opener of Big Ten play against Indiana. Bersano finished with two shutouts and five saves from a pair of wins last week.

D David Mayer, Charlotte - Charlotte picked up its first two wins of the season over the past week thanks to the play of Mayer. The defender registered the game-winning goal against Gardner-Webb. He also had an assist in the victory.

D Luke Read, Northern Illinois - Read scored his first career goal in a 1-0 win over Florida Atlantic. Read and his cohorts in defense only allowed one shot on goal throughout the victory. Read followed up that performance with an equally impressive effort on Sunday. He scored the lone goal in a 1-0 win over Stetson.

D Bradley Bourgeois, Tulsa - The defender scored a goal in both of Tulsa’s wins over the past week. Bourgeois headed in the second goal for Tulsa in a 6-2 win over local rival Oral Roberts on Thursday. He headed in Tulsa’s first goal in a comeback win over Portland on Sunday.

D Michael Nelson, Old Dominion - Nelson was named the MVP of the Stihl Classic after he helped the Monarchs pick up a pair of wins over Jacksonville and Hartford. Nelson scored his first goal of the season on Sunday in a 3-2 win over Hartford.

M Richie Laryea, Akron - The Akron sophomore was the most valuable player for the Zips during a week where they recorded wins over a pair of ranked teams. Laryea had two goals and an assist in a 3-2 win over Maryland last Monday. He then had a pair of assists against Saint Louis as the Zips erased a 2-0 deficit and won 3-2.

M Jack Harrison, Wake Forest - The freshman midfielder had three assists in the two Wake Forest wins over the past week. Harrison notched two assists in the 4-0 win over Virginia Tech on Friday, which was his first taste of ACC action.

M Chris Wehan, New Mexico - Another week, another spot on the Team of the Week for the Lobos superstar. Wuhan scored the game-winner against Cal State Northridge and Loyola Marymount over the weekend.

F Bradley Farias, Campbell - Farias scored or assists on five of Campbell’s six goals over the weekend. Campbell picked up a pair of 3-2 wins thanks to the performances of Farias, who leads the Big South in points and goals.

F Timmy Mueller, Oregon State - There has been no sophomore slump for Mueller. The prolific forward is rolling right along in his second season with the Beavers. Over the weekend he scored three goals including two game-winners. Mueller scored both goals in a 2-0 win over Cornell. He found the net once in a 3-2 victory over Duquesne.

F Colin Bonner, UNC Wilmington - Bonner scored a goal and added two assists as UNCW continued to roll through early opposition. Bonner was the key cog in the UNCW win over South Carolina. His consistent production has UNCW on a four-game winning streak.