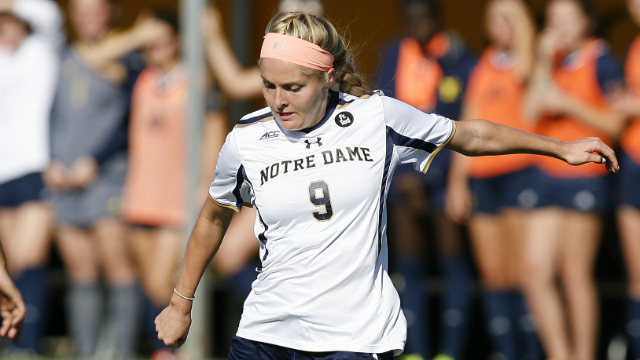 The talented freshmen class that joined the DI women’s soccer ranks this season continues to make a big impact on the first few weeks of the season.

One of this fall’s top recruits earned Player of the Week honors after scoring two game-winning goals in two games for an ACC side.

More on that below, plus the latest Team of the Week. GK Julie Eckel, Tennessee – Eckel’s impressive start to the season carried over to SEC play, as the netminder made five saves as the Volunteers opened up the league slate with a 1-0 shutout win on the road against Arkansas. She was also alert and sharp in an 8-0 defeat of Belmont on Sunday.

D Brittany Basinger, Penn State – It was a huge weekend for Penn State, which kept Stanford at bay on Friday night in a 2-0 win, and walked away from Santa Clara with another 1-0 shutout victory. Basinger logged 180 minutes across both games, tacking on an important insurance goal in the win over Stanford.

D Paige Nielsen, North Carolina – Nielsen enjoyed a great outing on Friday’s return to her home state Nebraska, leading the Tar Heel back line to a clean sheet in a 3-0 victory. Back in North Carolina on Sunday, she helped keep the UCLA defense at bay, limiting the Bruins to one shot on goal in a 3-1 win.

M Danielle Rotheram, Cincinnati – A massive weekend for Rotheram offensively, as she scored a goal and had an assist in a 2-0 defeat of St. Francis (PA). She followed that up with a hat trick against Duquesne, as the Bearcats rallied from a 2-0 deficit to win 3-2 on the road.

M Lucy Lara, Arizona State – While the Sun Devils suffered a set back for the first time this year on Sunday, Lara and the offense hit an impressive gear Friday, as she dished out three assists in a 5-0 defeat of Pepperdine.

M Celina Jimenez, Alabama – The World Cup veteran Jimenez scored the game-winning goal in overtime as Alabama won its first SEC game of the year, coming from behind twice in a 3-2 win. She played 85 minutes as Alabama also beat Southern Mississippi on Sunday.

F Natalie Zelenky, Delaware – The striker had a hand in all three of Delaware’s goals on Sunday, scoring twice and adding an assist on the way to a 3-1 victory against George Washington.

F Natalie Jacobs, Notre Dame – Have the Irish found its go-to goal scorer? The freshman’s fast start to the season continued, as she scored the winning goal in wins over Indiana on Friday and Michigan on Sunday to earn Player of the Week honors.

F Lucielle Kozlov, Dartmouth – The Canadian forward enjoyed quite the pair of performances last week, scoring four goals in two games in victories over Albany and Vermont for the Big Green.

F Rachel Ugolik, Providence – The Friars dominated a pair of wins against regional rivals, thanks to the offensive output of Ugolik. The junior netted a goal in a 2-1 defeat of Brown, before tacking on two goals and an assist on the game-winning goal as the Friars topped ACC side Boston College.