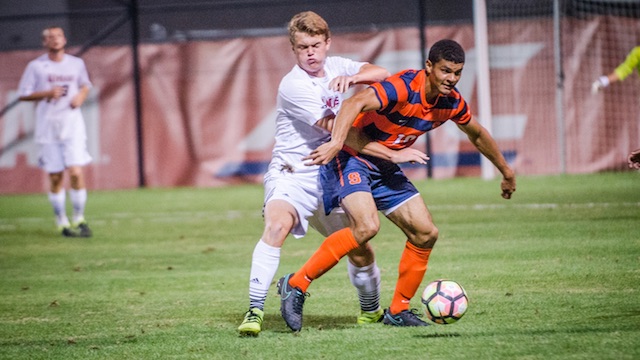 The Generation adidas initiative is analogous to a thirsty man sucking a reservoir through a straw.

Of the thousands of college players who aren’t seniors, only somewhere between five and 10 will ultimately be extended a GA contract. It’s a workaround for non-seniors to bypass the MLS draft’s restrictive eligibility laws, and it only ends up pulling in a handful of players. It’s not particularly sustainable to open up the GA rule to dozens of players (money concerns being chief among the issues), but it’s still a meager way to pull in the best college players.

That said, it isn’t going anywhere any time soon. And it’s certainly in place this year.

What follows is my official MLS recommendations list for the 2017 Generation adidas class, ranked in order of necessity with the draft just around the corner. A reminder that each of these players has yet to hit his senior year and has no MLS Homegrown attachment. As MLS reaches out to players to extent GA deals, these should be the moves.

If I told you the most prolific attack in college soccer, you most likely wouldn’t immediately guess Florida Gulf Coast. And you probably wouldn’t imagine they’d push eventual College Cup semifinalist North Carolina to OT in the College Cup. Ruiz was the tip of that spear, and he ultimately won the DI golden boot with his expansive exploits in the final third. As a junior, Ruiz is ready for the big show.

Out-and-out wingers often have a tough time converting their talents from the college game to MLS, and we still haven’t forgotten Portland’s high profile whiff on 2014 first-round pick Schillo Tshuma. Whether or not that makes Twumasi more of a risk, he’s been a tornado for Wake Forest as a freshman and should be firmly on MLS’s radar. Whether or not it’s too early (Twumasi still has two more GA eligible years), he looks like one of the better wingers to emerge from college soccer in recent years.

MLS is no stranger to poaching GA players from colleges without much notoriety. The problem is in the talent conversion (Damion Lowe didn’t work out so well). That could ward MLS off of Pinhero, the incredibly productive, bruising forward from Albany. But at least in this case it shouldn’t. Pinhero’s been a godsend to Albany, and he’s as pure a No. 9 as you can get. In terms of back-to-goal forwards, Pinhero has the talent to crash MLS.

All indications point toward Tim Kubel returning to Louisville for his senior year, but that shouldn’t stop MLS from attempting to woo him. Kubel’s age might (he’s a 23-year-old junior) might stop some MLS clubs from diving in, but he’s a bonafide wide player who would fit a team running the en vogue 3-5-2 perfectly. What’s more, his history in the Borussia Dortmund youth system when Jurgen Klopp was there means he’s versed in fast-paced attacking soccer.

Increasingly, to see a college player with a “Montverde Academy” tag next to their name is a TDS Approved Seal of Quality. Shinyashiki has one. After a massive high school career, the Brazilian forward broke out in 2016 and finished his season with a goal in the College Cup semifinal against Wake Forest. Shinyashiki has an incredible nose for goal and should be collected before he jumps for more lucrative waters later on in his career.

Stanford won its second straight national title in December. In 2015, the Cardinal’s major breakout was of course Jordan Morris, who scored twice in the final. In 2016, Stanford’s defense shone with a collective shutout in the NCAA tourney. As good as Brian Nana-Sinkam was, junior Tomas Hilliard-Arce was Stanford’s best defender throughout in the middle, and he’s GA eligible. College soccer still has plenty of defensive talent available, and Hilliard-Arce is No. 2 on the list.

Over the past two years, Gordon Wild’s emerged as the most productive poacher in college soccer. When you think Wild, think a more technically able Chris Wondolowski with a terrifying left foot. Wild’s poured in goals for fun since coming over from Germany in 2015, and he’s a pure space investigator (which should remind you of one Thomas Muller). Wild is a master at finding little crevices of space and turning them into goals.

Minnesota United mourns Yueill’s status. The U20 MNT attacking midfielder came of age in Minnesota before MUFC rose to power, meaning they don’t have a Homegrown claim. That means if the sophomore is to come out before his time, he’ll have to be trailing a GA tag (assuming no MLS chicanery). That means Yueill is a likely GA target, and he should be because he has a creative engine few can match in college soccer. A technical midfielder? Sign MLS up.

The 2015 College Cup was big for Syracuse, and for Miles Robinson in particular. It was the Orange’s first appearance on that stage, and it also introduced a wider audience to Robinson for the first time. The lanky center back has all the tools in the middle, a staunch ability to kill off attacks and a commanding aerial presence. Robinson is the most MLS-ready defender in the college pool, and MLS would be wise to heed his call.

Danladi is an interesting case. He’s been injury prone throughout his three years in college soccer, which could ward off interested parties when it comes to signing on the dotted line. In line with those concerns, he’s also not the most physical player up top, which again could play out negatively on draft boards. But Danladi remains the single most talented player in college soccer, and that promise should carry through to a GA contract. If the mega-talented forward can stay healthy, he’ll be an MLS great.