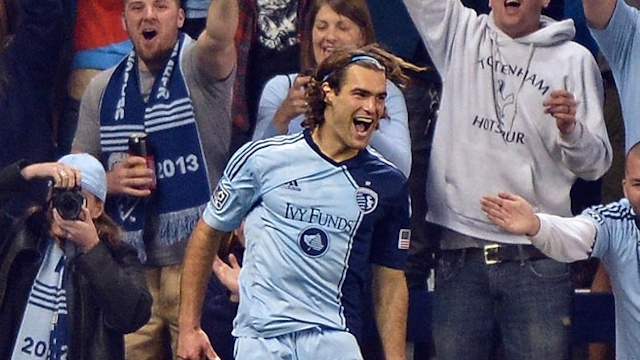 College soccer and MLS have been joined at the hip since the league first splashed onto the scene in 1996. For the first time, TopDrawerSoccer.com has quantified that relationship by compiling every college player currently listed on an MLS roster for the 2014 season.

This is instructional primarily as a tool to help guide the discussion about the integrated relationship between MLS and college soccer. The two have become so intertwined on a root level over the past 18 years that both have come to rely on each other for growth. How beneficial the relationship has been, and where it may be going, are valid talking points.

While a large proportion of the league’s elite players were either acquired from abroad or skipped the college route altogether, the league’s depth - for better or worse - is made up largely of players from the college realm. Here are some notes on the numbers.

- Of the 534 players currently listed on MLS team rosters via official sites league-wide, 315 came through the American college system. That’s 58 percent of the league’s total player base. Of those, 208 players, or 66 percent of the college total, stayed in college all four years. The relatively light cap burden provided by most of those four-year players also plays its part in the process. A quick glance down the list reveals a horde of names who provide depth but not a substantial hit against the cap.

- The average MLS team carries 16 college players. The team with the fewest number of those players? That distinction belongs to the Vancouver Whitecaps, who employ just eight. The New York Red Bulls (nine) and Montreal Impact (10) aren’t far behind. The most? The Columbus Crew, who have a reputation for economic conservatism, currently carry 26 college players, or 83 percent of the roster. A staggering 21 of those completed all four years at the college level. On the flip side, one-and-done players are exceedingly rare league-wide. There are only 17 currently listed on MLS rosters. The Philadelphia Union, D.C. United and Colorado Rapids lead the way in that category with three apiece.

- The Canadian system doesn’t put the same weight on the college experience, which bares out in the number of college players on the three MLS sides north of the border. Vancouver (eight), Montreal (10) and Toronto FC (12) are each in the top five on the list of fewest college players. FC Dallas and the Red Bulls round out the top five.

- Heavy college experience tends to be more prevalent among defenders and goalkeepers, and the vast majority of the latter stayed for the full four-year ride. The same can’t necessarily be said for attacking players, who tend to leave college early in droves or skip it altogether. Most of the best technically inclined players on this list (Deshorn Brown, Darren Mattocks, Kelyn Rowe, etc.) didn’t spend more than two years in college. Defenders, keepers and even holding midfielders are another story.

- An overwhelming number of players were seniors when they left for MLS, but the league is made up of a significant number of underclassmen and juniors who left early. Logically, players leaving early would seem to have a leg up in the battle for minutes given that the option was on the table. That tends to bear out. There are some notable exceptions, but a quick glimpse at players who opt to come out early is largely a list of the nation’s best college products. As a predictor of playing time, it’s not a perfect litmus, but it provides a good (if rough) sketch.

This is the list of every college player currently listed on an MLS roster as of March 25, in addition to the length of their college tenure and their school(s) of choice. The number listed next to each team name represents the number of players with college experience as a fraction of the entire roster. Please note that this only takes into account the American college system. This is a breathing list, and TopDrawerSoccer.com will continually keep it updated at various points throughout the year.