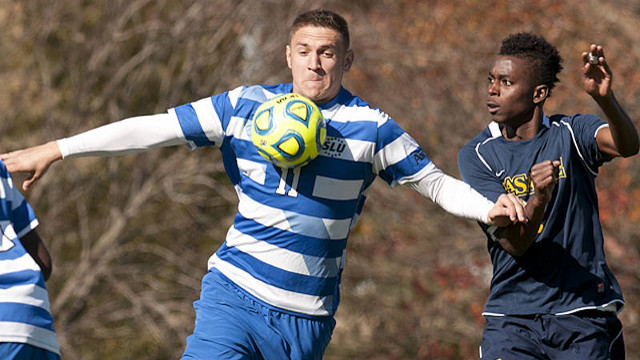 Robbie Kristo fired the Billikens on top in the first Half, but Jason Plumhoff equalized in the 78th minute. Kingsley Bryce and Alex Sweetin scored in the final 5 minutes to give SLU the win.

Justin Marshall was the hero in goal for the Musketeers in penalties. Daniel Berko had put Dayton up 1-0 in the firsthalf, but Xavier’s Matt Walker equalized in the 56th minute.

Tyler Gibson scored a last-minute winner for the 49ers. Jennings Rex had opened the scoring for Charlotte, but Martin Fiemawhle equalized for Duquesne.

Mario Herrara Meraz scored a last-minute winner for the Rams, who got a shutout in goal from Clark Hankins.

Darren Cooper scored 15 seconds into overtime to win it for the Purple Eagles.  Roberto Andersson had put Niagara on top in the secondhalf, but Siena’s Matt Hemsley tied the score less than a minute later.

Caleb Downey, Scott McGillivray and Zane Dydasco fired the Falcons to a 3-0 lead in the opening half before Salvador Bernal pulled on back for the Rebels. Conor Henry made it 4-1 for Air Force at half time, and an own goal cut the final margin to 4-2.

Cole Chapleski scored an overtime winner for Denver on an assist by Taylor Hunter. Josh Wren gave the Pioneers a 1-0 halftime lead,, but Jonathan Salcedo equalized for the Spartans in thesecond half.

Southern Conference Player of the Year Chris Thomas scored the winner for the Phoenix. Nathan Dean recorded the shutout in goal but got a huge assist from Mark Berlin, who cleared a ball off the line early in the contest.