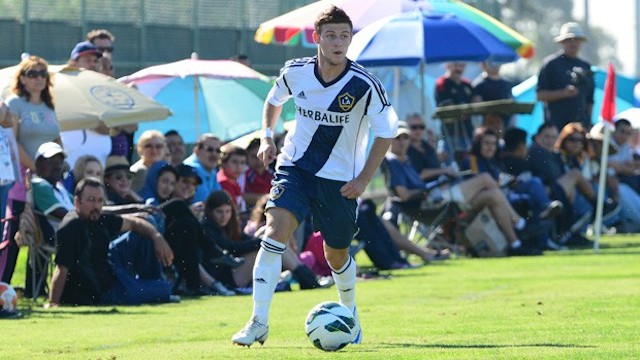 The story of how Jamie Clark stumbled on Cristian Roldan may sound like an urban legend in the decades to come, especially considering the fact that Roldan is now a professional with the Seattle Sounders.

But it isn’t. Clark found Roldan by mere happenstance at a Surf Cup in 2012 on an anonymous side field. The Washington head coach was trying to fill the final spot in his 2013 class, which already included highly ranked stalwarts like Mason Robertson, Jose Ocampo and transfer Darwin Jones, who signed a Homegrown deal with the Sounders earlier this year. Clark’s diligence was a magnet for Roldan, who went on to win the Gatorade High School Player of the Year trophy and polished two top quality college seasons last fall. The midfielder begins his pro journey with the Sounders later this year.

But that’s the surface story in Roldan’s unlikely recruitment into American soccer’s professional pipeline. The underlying story is has much farther-reaching implications for where elite development goes from here.

There’s no denying that the foundation of U.S. Soccer’s Development Academy in 2007 forever terraformed the developmental terrain in this country. For the first time there was a discernible chute from the high school age bracket to the pros. But as a contained system, it had a noticeable breech in the pipe from the ages of 18 to 22, where it relied on either college or foreign systems to finish the player’s development.

Imperfect from the start, the academy stewed on its options. Reserve leagues? Larger rosters? Nothing stuck. The newest trend, though, appears to have legitimate traction, and that’s routing top academy prospects and Homegrown signings through club-owned USL PRO sides. In the sense that USL PRO has, wittingly or not, set itself up as direct competition for college soccer, there’s little doubt the two will wrestle over players for the foreseeable future.

That speaks into Clark’s recruitment of Roldan, and his broader recruiting philosophy as a whole. It echoes the coming tide. Do you dip into the MLS pool for academy players who have more recourse to jump at pro contracts than ever before? Or do you look for lightly recruited gems left half-buried in the sand due to the imperfect identification system in the U.S.?

Coaches like Clark, who are legion, represent the latter category.

“Recruiting MLS academy kids is a riskier business these days,” Clark said. “I prefer, if all was equal, to find a non-MLS academy kid. Because you’re not dealing with every day whether he’s going to sign. We deal with the Sounders all the time and appreciate their development model, but it’s tricky when you start working further out. If you think you’ve got a superstar, it’s funny how quickly recruiting classes change.”

Signing Day is this week. The spectacle means less in soccer than perhaps it does in any other sport, considering players tend to make their decisions on a separate timeline. The day tends to lack drama, because the players who’ve decided to turn pro have either already done so, or they won’t announce until later in the year.

Not everyone is with Clark. UCLA represents the program on the furthest extend of the other side of the spectrum. The Bruins aren’t shy about hunting the country’s top players, regardless of their club affiliation or pro prospects. Based on the results, it’s a hard one to fault. The Bruins owned the top-ranked recruiting class last year - one of many in the past decade - and it helped them get to the College Cup title game in 2014. Abu Danladi, the best freshman in that class, was a high school player who never sniffed the Development Academy.

Now, with the rise of USL PRO and professional soccer, even programs like UCLA are having to tailor their recruiting classes around the changing times. Specifically, does that mean perhaps a change in focus?

“It does now more so than ever,” UCLA coach Jorge Salcedo said. “The past few years we have lost players that’ve either signed national letters of intent or have been verbally committed to us for several months if not over a year, and never showed up on campus. What we’ve done differently in this recruiting class is, it’ll be one of the bigger recruiting classes we’ve had in the last five years or so.

“Our approach this year was to really put a net around as many top players as we could knowing we’ll lose some of the guys who come in and step on the field right away. And for us to make sure that we’re good for the next four, five, six, seven, eight years.”

For the players, there’s a sense of being caught in the middle between two competing theories of development. In one sense, college represents the old world: stability and a sane, sensical path forward. A minuscule fraction of players who sign USL PRO contracts will continue their pro careers at a higher level, and many college coaches are quickly to highlight the fact that even many of their partial scholarships are worth many times the average Homegrown deal, which works out to less than $50,000 per year. Coupled with a degree, which players need after their careers inevitably end, and it’s hard for parents to not see the value.

The newer path being fronted by MLS and USL PRO presents higher boom/bust potential. The path itself is narrow, open primarily only to those players ensconced in MLS academies or otherwise chased by those pro clubs. But it also presents higher visibility, pro training and a direct pipeline to first team minutes. Meanwhile, for players like Roldan or Washington’s 2016 MLS draft prospect James Moberg, who lived four hours from the nearest Development Academy, college soccer’s catchment area is seemingly endless.

Moberg, who’ll enter his senior year as one of the top midfielders in the nation, can see both ends of the spectrum. But he doesn’t see college going away any time soon as a viable option even for the country’s top young superstars.

“I think there’s a lot of people that still want to go to college for at least a year or two,” Moberg said. “There’s families that want their kids to get educated. I think college coaches are still going to take chances on kids and try to recruit them. But also at the same time, there’s a lot of players who don’t live close to academies who have to drive four hours, like for me. I just played club and high school because I couldn’t afford to drive four hours there and back. Luckily through different tournaments I was seen.

“With MLS academies becoming huge, and the opportunities they have to become a pro without going to college, I feel like some players will jump at that, but others know they aren’t ready yet so they want to go experience college for a year or so. I don’t think that makes the college coaches not recruit them as much, I just think they know the kids aren’t going to stay as long anymore.”

The most fascinating case study in this arena is Stanford’s Jordan Morris, who turned down MLS to stay in college at least through his junior season. Late last year, Morris became the first college player called to the full national team since 1999, and the Sounders have chased him as a potential Homegrown for some time. Yet Morris’ decision to stay in college has puzzled some who see his name in marquee professional lights immediately.

Morris’ story quickly became the touchstone for the pro vs. college debate. For Clark, the issue makes sense. And while he hasn’t run into a recruit he had to cajole into playing college soccer over turning pro, Morris’ story stands out.

“We haven’t dealt with a lot of it yet,” Clark said. “The better school you’re at, I think you’re going to deal with it less and less. Unfortunately the kids who need school the most tend to leave earlier. And kids like Jordan Morris, who could finish up whenever he wanted to, will be in the least rush. It’s a sad situation in terms of that. The kids who need to stick around tend to have the biggest stars in their eyes.”

The evolution of the men’s recruiting landscape in college soccer is perhaps the fastest changing of any college sport. While the women’s college game has an undisputed hammerlock on the 18-to-22 pipeline, the men’s game is fending off challengers left and right. Those shifting sands will continue to alter a game that’s molting before the eyes of the nation.

“The recruiting landscape is different than it’s ever been in college soccer,” Salcedo said. “It’s simply because there’s so many choices for elite players in our country. It used to be that you have to worry about just MLS teams or guys committing to other professional opportunities, but now it’s like the whole world understands American players can bring value to the organization. We’ve seen the landscape changed quite a bit over the last few years with the new USL teams MLS teams are going to fund. It’s made it more challenging for us, but it’s made it where you absolutely have to identify the right talent.”