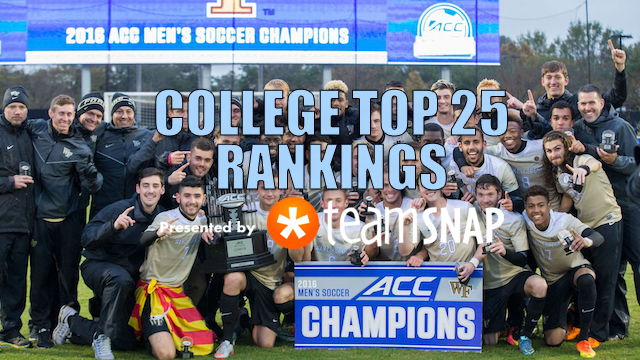 The men’s Division I Tournament kicks off this week. On Monday, the 48 teams left in the hunt for the title will find out who they will be playing on in either the first or second round of the competition. The hunt for the ultimate title in the men’s college games looks to be headed through Maryland, which completed an unbeaten campaign on Sunday with the Big Ten Tournament title.

The Terps are 18-0-2 on the season and the favorite to take the No. 1 seed in the NCAA Tournament, which will be announced Monday afternoon. Star forward Gordon Wild is one to watch for the postseason.

Wake Forest (15-2-3), the ACC Tournament Champion, is No. 2 in this week’s TopDrawerSoccer Top 25. The Demon Deacons are playing their best soccer of the season as they head into the NCAA Tournament during a nine-game unbeaten run.

Stanford (11-3-4), the Pac-12 Champion, is No. 3 this week. The Cardinal closed out the season with a win over local rival California. Stanford has only played one game in November. Jeremy Gunn and his coaching staff are hoping that the light schedule at the end of the season will allow the fresh legs to carry them to another College Cup appearance.

Clemson (12-3-5) finished as the ACC finalist after losing in the final to Wake Forest on Sunday. The Tigers are No. 4 in the TopDrawerSoccer Top 25.

Denver (17-0-3) rounds out the top five. The Pioneers are still riding that lengthy unbeaten run as they head into the postseason with a lot of confidence and likely a few home games in the near future.