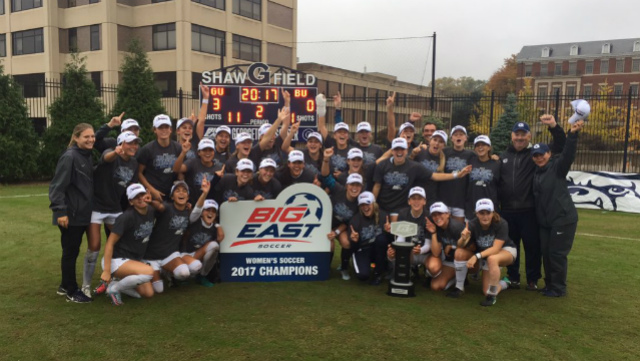 The women’s Division I NCAA Tournament Selection Show is on Monday, Nov. 6, when favorites learn their path to a College Cup and bubble teams’ fate is decided.

Over the weekend, conference champions were crowned around the country. Below is a recap from a handful of tournaments and a full list of automatic bids.

For the Blue Devils, all 19 of those games had ended as Duke wins.

So in some ways it wasn’t a huge shock to see UNC edge this meeting a single goal, as Zoe Redei’s 46th minute goal provided the margin of victory in a 1-0 win for the Tar Heels.

UNC’s defense did enough to keep the Duke attack at bay for most of the game, limiting the potent ACC side to just a pair of shots on goal.

A College Cup side last year, the Georgetown Hoyas are getting hot at the right time of the season once again.

Facing a Butler team that conceded just four goals all season heading into Sunday’s match, the Hoya attack was on point once again, rolling to a 3-0 win on the Hilltop.

Early goals can be decisive, and Taylor Pak’s finish on a set piece in the seventh minute relieve any pressure the home side would’ve felt against a strong Baylor side.

Butler kept the Hoyas at bay for the rest of the half, but Georgetown would tack on goals in the 51st minute through Caitlin Farrell, and senior midfielder Rachel Corboz rounded out the scoring in the 88th minute.

With potentially dangerous storms rolling through Indiana, sight of the Big Ten final, kickoff between Penn State and Northwestern was moved up to 11 a.m. local time.

Storms in the area started earlier than expected, and the game didn’t actually begin until around 1:30 p.m. local time. Then, after Northwestern took a 1-0 lead, the game was delayed, and eventually moved to Grand Park’s indoor, full-field facility for the rest of the time.

That’s where Penn State bounced back.

Northwestern kept its lead until the 71st minute, when Laura Freigang equalized, and eight minutes later, Haleigh Echard secured the Big Ten title with the game winner, as the Nittany Lions won by a 2-1 score.

With Duke’s loss, Texas A&M now has the second-longest active winning streak in the nation.

The Aggies made it 13 wins in a row in Sunday’s SEC tournament final, defeating a plucky and determined Arkansas side by a 2-1 score.

An own goal opened the scoring for the Aggies in the first half, and the lead stood until the 81st minute, when Arkansas freshman Parker Goins equalized with a right-footed finish from range.

Just when the game appeared to be on the precipice of overtime, a sterling individual effort from Emily Bates won it with under three minutes to go. Facing a defender on the left side of a goal, she dipped past her mark and slid a left-footed effort underneath the  goalkeeper to make it a 2-1.