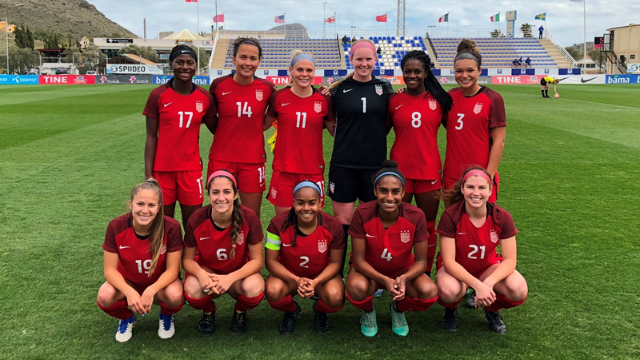 The U.S. Under-20 Women’s National Team will gather in Portland, Oregon, from June 25-July 12 for the final training camp before U.S. head coach Jitka Klimkova chooses a 21-player roster for the 2018 FIFA U-20 Women’s World Cup.

Klimkova has called up 24 players for this event which will include two matches against the Brazil U-20 WNT and a game against Portland Thorns FC. Brazil handed the USA one of just four losses during this cycle during a 2-0 result at the Women’s Nike Friendlies in December of 2017.

Nineteen of the 24 players on this roster are in college with five still playing youth club (all for U.S. Soccer Development Academy teams). Defender Naomi Girma (California Thorns FC), midfielders Jaelin Howell (Real Colorado), Brianna Pinto (NTH Tophat) and forwards Sophia Smith (Real Colorado) and Penelope Hocking (So Cal Blues) are the players on the roster who have not yet enrolled in college. All five will be head to college next fall, at Stanford, Florida State, UNC, Stanford and USC, respectively.

The USA is coming off a tournament title at the Sud Ladies Cup in France in early June at which they beat Germany (3-0), Haiti (7-0) and the hosts (3-1). Hocking scored her first two international goals during the tournament, as did forward Erin Gilroy, who plays at Tennessee.

The U.S. U-20 WNT has gone 10-0-3 this year in international matches with 12 different players having scored, led by Smith, the 2017 U.S. Soccer Young Female Player of the Year, who has 11 goals in 2018 and 19 in her U-20 career. Smith is now tied with current WNT forward with Mallory Pugh for fourth all-time in U-20 international goals for the USA behind Sydney Leroux (29), Kelley O’Hara (24) and Lindsey Horan (24). Smith has scored in seven consecutive international matches.