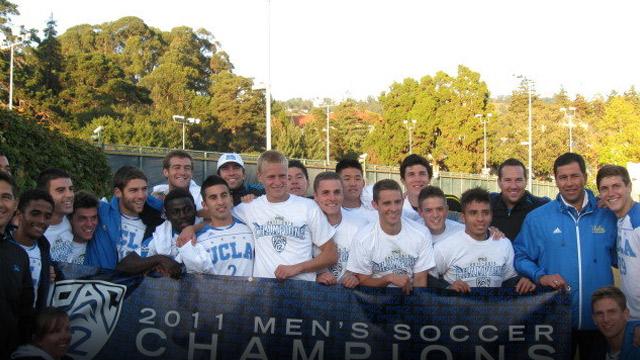 Berkeley, Calif. - The No. 8 UCLA men's soccer team clinched its third Pac-12 title in four years and seventh overall after defeating the California Golden Bears 2-0 on Friday afternoon in Berkeley. The Bruins got goals from Eder Arreola and Chandler Hoffman to secure the victory.

UCLA had a great scoring opportunity in the 15th minute as Kelyn Rowe lined up for a free kick from about 30 yards out. He put a ball on net that initially gave Cal keeper Kevin Peach some trouble, but Peach eventually held onto the ball and made the save, keeping the game at 0-0. The Bruins would break through in the 37th minute though, as Eder Arreola scored his third goal of the season to give UCLA a 1-0 lead. Patrick Matchett and Chandler Hoffman assisted on the goal and the Bruins would eventually go into the half with that 1-0 lead.

The Bruins maintained possession and held onto their 1-0 lead for most of the second half until the 88th minute, when Chandler Hoffman took a pass from Reed Williams and scored his 14th goal of the season to give UCLA a 2-0 lead, all but securing the Pac-12 title in the process. The Bruins would run out the final two minutes of play and defeated the Cal Golden Bears by the score of 2-0 to win their seventh Pac-12 title.

Overall, the Bruins outshot Cal 21-8 in the match and goalie Brian Rowe earned his 12th victory and seventh shutout of the year.