Another week, another No. 1 team falls to the wayside. 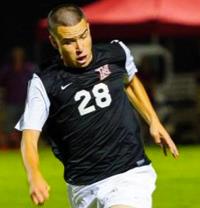 Connecticut lost 1-0 on Sunday against Bradley and dropped out of the No. 1 spot in this week’s rankings. The Huskies offense has struggled to click this season with only two goals from four games. Goalkeeper Andre Blake’s shutout streak was ended by a penalty kick by the Braves in the first half on Sunday.

Creighton, the No. 2 team last week, did not fare much better as the Jays lost 3-2 to William & Mary on Sunday in double overtime. It was the second double overtime clash of the weekend for the Jays, which won 2-1 on Friday against Old Dominion.

By the virtue of those in front faltering, North Carolina stumbles into the top spot after a 2-2 draw at home on Friday against Maryland. The Tar Heels are 2-0-2 on the season, which includes a pair of draws to start conference play.

Fellow ACC program, Notre Dame grabs hold of the No. 2 spot this week after  3-0 win over Syracuse on Friday. The Irish face a challenging schedule this week though with games against Michigan and at Boston College.

Creighton checks in at No. 3 after suffering its first loss of the season. This week, Creighton returns home for a game against No. 20 St. John’s on Saturday, which should be another tough test for the young squad from Omaha.

The Golden Bears of California move up to No. 4 after battling to a 1-1 draw with Penn State on the road on Friday. The Bears take on Colgate and College of Charleston this weekend.

Cal State Northridge takes up the final spot in the top five after a historic 3-2 road win over New Mexico on Sunday, which jumped the Big West program to the lofty status. The Matadors are 6-0 on the season after the victory on the Lobos and the 4-1 win over Central Arkansas on Friday. They are one of four programs with a perfect record after third week. Army, Clemson, and Dayton are the others with unblemished standings.