Talk about a trio of shockers.

Sunday saw three top 10 teams suffer all lose on the same day for the first time ever. Stanford, Notre Dame and Penn State all dropped conference games, opening the door for a handful of teams to jump up into the top five. 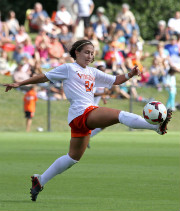 The Cardinal, after a 2-1 home victory on Friday night over Arizona, suffered a defeat on home turf to Arizona State, which edged the matchup 1-0. Sara Tosti's first half goal couldn't be canceled out by the hosts, which saw its 44-game winning streak in conference play come to an end, as well as a 73-game unbeaten run on home turf.

In Florida, the Fighting Irish lost its first ACC game of the season, as Ashley Flinn's two second half goals were enough in Miami (FL)'s much-needed 2-0 win. And in Minnesota, the Nittany Lions outshot the Golden Gophers 20-6 on the day, but couldn't find the back of the net and were undone by Haley Helverson's 17th minute strike, falling 1-0.

The three illustrious programs had never lost all on the same day before in the history of women's college soccer, making for a pretty monumental milestone.

Leapfrogging its Pac-12 rivals, UCLA lands in the second spot on the back of a 2-0 win against Washington State on Friday night. The Bruins, who have now won six games in a row, take on Washington on Monday night.

Coming in behind the Bruins at No. 3 is Florida State, one of four undefeated teams in the top 25. The Seminoles suffered a scare last Thursday, conceding two first half goals against Boston College, only to erase the deficit with four second half tallies to win 4-3.

With Stanford bumped down to the fifth spot, jumping into the top five at No. 4 is North Carolina, which erased a one-goal deficit against Maryland on Sunday, winning 3-1 in Chapel Hill. Summer Green, Kealia Ohai and Satara Murray accounted for the Tar Heel offense in the victory.

Also avoiding the upset bug in ACC was No. 1 Virginia. With just a single Sunday matchup to contend with against Clemson, the Cavaliers took care of business against the Tigers, winning 3-0 behind goals from Morgan Brian, Danielle Colaprico and Makenzy Doniak. The victory moves their record to 12-0-0 as the perfect season rolls on in Charlottesvile.

Rounding out the rest of the top ten is Notre Dame, Georgetown, Penn State, Portland and Wake Forest.

Check out the full rankings here.