U.S. U20 WNT roster for tourney in France 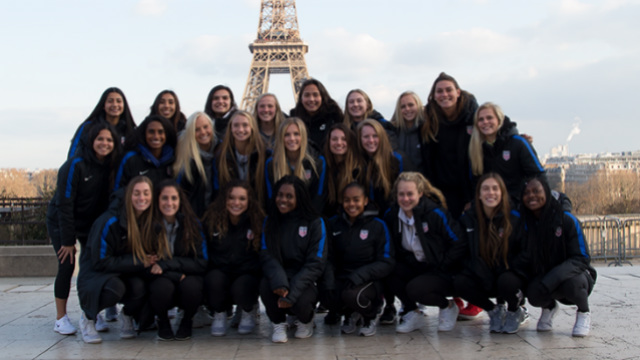 The U.S. Under-20 Women’s National Team will travel to France to participate in the Tournoi Maurice Revello Sud Ladies Cup that will feature the U-20 WNTs of Germany, France and Haiti.

All four teams in the round-robin tournament have qualified for the 2018 FIFA U-20 Women’s World Cup, making this competition a valuable dress rehearsal for group play at the World Cup, which will be held in four venues in the Brittany region of France from Aug. 5-24.

The USA will face Germany to open the Sud Ladies Cup on Tuesday, June 5. The U.S. team will then take on fellow CONCACAF qualifier Haiti on Thursday, June 7, and finish against host France on Sunday, June 10.

The USA and Haiti met in the semifinal of the 2018 CONCACAF U-20 Women’s Championship with the USA prevailing in penalty kicks (3-0) after a 1-1 tie during regulation to earn its berth to the World Cup. Haiti then upset Canada in the Third-Place match to earn its first-ever spot in a FIFA Women’s World Cup at any level.

All three games will take place at the Stade D'honneur D'athletisme in Salon-de-Provence, which is about 30 miles north of Marseille.

Seventeen of the 22 players are in college with five still playing youth club, all for U.S. Soccer Development Academy teams. Defender Naomi Girma (California Thorns FC), midfielders Jaelin Howell (Real Colorado), Brianna Pinto (NTH Tophat) and forwards Sophia Smith (Real Colorado) and Penelope Hocking (So Cal Blues) are the players on the roster who have not yet enrolled in college. All five will be head to college next fall at Stanford, Florida State, UNC, Stanford and USC, respectively.

The U.S. U-20 WNT has gone 6-0-4 this year in international matches with nine different players having scored, led by Smith, the 2017 U.S. Soccer Young Female Player of the Year, who has seven goals and 15 in her U-20 career. DeMelo, Howell and forward Abigail Kim from UC Berkeley and Stanford striker Civanna Kuhlmann (who is injured) have each scored twice.