The West Coast Conference released its coaches’ preseason poll last week, and Santa Clara was the overwhelming favorite to win the conference with seven of the nine first place votes.

Portland, the program that produced Olympic stars Christine Sinclair (Canada) and Megan Rapinoe (USA), is expected to be a middle of the pack team in its conference.

The Pilots, which still boosts a roster with a few youth national team standouts, would be a top pick in nearly any other league, are a good example of how strong the WCC is on the whole.

“With the recent addition of BYU, we are definitely strengthening our conference,” Smith said.

The Cougars joined the WCC last season and finished fourth, but missed out on an NCAA tournament bid due to a low Ratings Per Index (RPI) at 56.

San Diego and Pepperdine shared the league champion honors in 2011 (there is no conference tournament in the WCC) and joined Portland and Santa Clara in the postseason.

The Pepperdine Waves return 2011 WCC Freshman of the Year Lynn Williams for her second campaign this fall. Williams led the league in shots and shots on goal in her debut season. 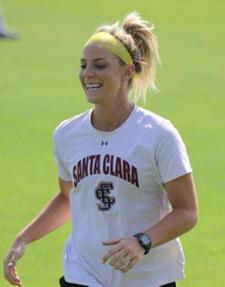 She is a constant threat up top that should keep the Waves going through a tough schedule.

Also watch out for Roxanne Barker (goalkeeper) and Michelle Pao (defense/midfield) as potential breakout candidates in the league. Pao and Barker made the preseason All-WCC team.

It is going to be extremely difficult for head coach Ada Greenwood to fill those shoes, but he can rely on the return of Mariah Butera. The utility player was very good in her freshman campaign and earned recognition with a spot on the preseason All-WCC team.

The preseason favorites will need a bit of luck out of the gate. Star player, and one of the best in the nation, Julie Johnston is off in Japan with the U.S. U20 Women’s National Team for the World Cup. Johnston’s return is expected in mid-September, which means she will be there for conference games but likely to miss the non-conference slate.

For the Broncos, that out of conference schedule includes some challenging games against Stanford, California, and Notre Dame.

The BYU Cougars have 11 home games in 2012. That is 11 times BYU will trot onto the field in front of one of the best crowds in the nation with the expectation of securing three points.

Last season, BYU faced the reality about how difficult the WCC is when the Cougars lost two of their final three home games and let the league title slip through their fingertips.

This fall should be different and preseason All-WCC selections Lindsi Lisonbee Cutshall and Carlee Payne Holmoe will be the main driving force in making the difference.

The Pilots enter 2012 with a massive storm heading their way. The name of that storm is the UNC Tar Heels.

Portland opens up this fall on Friday with a home clash against Anson Dorrance’s ladies. The schedule does not get much easier after that with games against Oregon State and Notre Dame in the first few weeks.

Micaela Capelle, Amanda Frisbie, and Kendall Johnson are expected to be the leaders of the team this year. Capelle earned preseason All-WCC team honors.

The Dons preseason is off to a rocky start with a 4-2 loss to UC Davis last weekend. Sophomores Jaciara Mello and Mackenzie Krieser scored for the Dons, but if that defense does not improve when the real games start, it will take a lot more than two goals to stay competitive in the WCC.

Jerry Smith cited the work that head coach Kai Edwards is doing at St. Mary’s over the past few seasons, but it is going to take a lot of work to break into the top five of the WCC.

Edwards is trying to build a sustainable program and should start to see the results soon.

LMU went through a coaching change in the offseason with Michelle Myers taking control of the program. The leader of Cal South ODP is one of the hardest workers in the sport, and she will get this team headed in the right direction.

Lions fans should have some patience though, it may take her a recruiting class or two to get the right pieces on the beautiful LMU campus.

The Zags only lost three starters from last year’s roster, which should help this fall with a more experienced roster. Senior Emma Dolcetti led the team in scoring last year with five goals in 19 games.