The Seminoles of Florida State (9-0-0) continue to hold down the top spot in the TopDrawerSoccer.com Tournament 64 ranking. This week, Mark Krikorian’s side takes on #16 North Carolina and NC State (5-6-0) in road clashes in Atlantic Coast Conference play. See below for a detailed breakdown of the game against UNC. 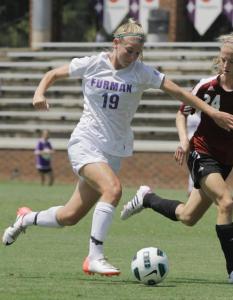 Jordan Day and the #3 Texas A&M (10-1-0) Aggies put their seven-game shutout streak on the line on Friday with a road contest against Kentucky in SEC play. Following the clash with the Wildcats, the Aggies head down to Mississippi for a showdown with Mississippi State (7-3-1).

The #5 Penn State (8-2-0) Nittany Lions are looking to keep their hot streak in Big Ten play rolling this weekend with games against Ohio State and Minnesota.

Finding a game outside the Atlantic Coast Conference to profile was fairly difficult this week, so the top team in the nation once again gets the spotlight.

The Seminoles enter Thursday’s showdown on the verge of history. Florida State has never won ten games in a row and now has the chance to start the 2012 season with that streak.

Standing in the way are the Tar Heels of North Carolina. Anson Dorrance’s side is 1-1-1 since the return of U.S. U20 Women’s National Team players Bryane Heaberlin, Kealia Ohai, and Crystal Dunn to the roster two weeks ago. An impressive win against Virginia Tech last weekend indicates the Heels should be ready to rumble against the top-ranked team in the land.

The Drake Bulldog’s (10-2-0) schedule has been soft this year, but 10 wins before the end of September is impressive and nothing to overlook. The Missouri Valley Conference program has mainly done its damage at home with the last seven wins coming at Cownie Soccer Complex. On Thursday, Drake hits the road for a conference clash against Northern Iowa (5-7-0).

Freshman Superstar: Stephanie DeVita entered Furman (8-2-0) this fall as one of the most decorated players in the program’s history. DeVita is the three-time Gatorade South Carolina Player of the Year. So far this season, she has lived up to the billing and then some. The freshman sensation has 10 goals and two assists in 10 games to help the Paladins to one of the best starts in program history. DeVita takes on a suspect Samford defense on Thursday.

Is She Bored? UCLA goalkeeper Katelyn Rowland has now accounted for more than eight hours of shut out play this season. The Bruins starting goalkeeper has not let in a goal in 495 minutes and only faced 12 shots on goal during that period.

West is Best? A quick glance at the top ten would suggest the ACC has complete bragging rights over the rest of the land, but the RPI (ratings percentage index) tells a different story. Four of the top ten teams are from California and seven of the top 15 are from west coast conferences. This all builds up to #26 Pepperdine’s game against #8 Boston College on Saturday. A road win for the Waves would give a huge boost to the team, the conference, and the narrative of west coast supremacy.