There is a certain point in the season when first year players hit the wall. Some fall to the wayside as the speed of the game and defenses catch up, but others hurdle the obstacle and continue to enjoy stellar rookie campaigns.

In women’s college soccer, the wall has been hurdled by a number of talented players. Freshmen are playing key roles on squads all across the nation. This past weekend a few made their marks on conference games with a certain emerging talent in the desert stealing the spotlight.

Shootout in the Desert

Arizona State (5-5-1) freshman Cali Farquharson scored a hat trick in a 5-4 win over USC (4-5-1) on Friday to give the Aztecs their first Pac-12 win of the season. Farquharson’s hat trick, historically more significant, is the first for a Sun Devil since 2000. 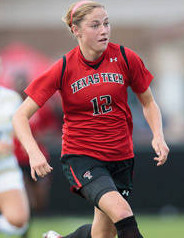 The local product is up to six goals in her debut campaign, which is tied for tops on the team.

"What I said to Cali is the same thing I've been saying to her all year," Arizona State head coach Kevin Boyd said after the game. "She's special [and] she needs a mindset where she should believe that she is going to score every game. It is something she is capable of and she has that ability. What a great day for her to get her hat trick and just come alive like she did."

Farquharson was not the only freshman leaving an impact on the game. Tommi Goodman scored her first career goal in the first minute of the second overtime period to give the Sun Devils the win.

It was not all good news for Arizona State in the games against the LA teams. On Monday, the Sun Devils lost 4-1 to the #3 UCLA Bruins (9-0-2) on Monday night.

The Bruins also won their first game in the desert 2-1 on Friday against Arizona. Senior Zakiya Bywaters scored both goals on the night.

Despite not getting the result, Arizona did manage to dampen the night for the Bruins. With Jazmin Ponce’s goal in the 70th minute, Arizona snapped goalkeeper Katelyn Rowland’s shutout streak at 563 minutes, which is a new UCLA program record.

The Kentucky men’s basketball team is not the only squad in Lexington that recruits high profile players. The women’s soccer team brought in a few of their own this season and had one play a key role in a big upset on Friday.

The two-goal effort from the Cats marks the first time this season that the Aggies have let in more than one goal in a game.

"I just thought it was such a fantastic game," Kentucky head coach Jon Lipsitz said. "Texas A&M is just pure class. Getting to know we are getting to play them every year is only going to make our program better. That's what I want from a big-time match-up."

The Wildcats could not keep the momentum rolling through the weekend though and dropped Sunday’s contest 2-1 to Alabama (7-3-2).

In Lubbock, Texas, it is another freshman who is leading the way for the top team in the Big 12. U.S. U18 Women’s National Team forward Janine Beckie had a goal and an assist in the Red Raiders 2-1 win over Iowa State on Sunday. Beckie has eight goals and three assists in 12 starts this season.

Lately, the standout freshman has taken a bit of a backseat to the red-hot form of sophomore attacker Paige Strahan. With goals in five straight games, Strahan is now the second leading scorer on the team with seven on the season.

Beckie and Strahan have helped propel Texas Tech (10-3-0) to its best start in program history. The Red Raiders are tied for the top spot in the Big 12 with Texas (5-6-1). The two programs meet next Friday in Austin.

First of the Year

Callie Payetta is hardly a freshman, but she grabbed her first of the season over the weekend in a timely fashion. Payetta, a senior, recorded the game-winner for the Waves in a 1-0 upset over Boston College (8-2-2) on Saturday.

"The Waves made the university very, very proud today," Pepperdine head coach Tim Ward said. "Every girl, whether they were on the bench or on the field, was giving it their all. We just beat a very good soccer team."

Ward also gave credit to the defense for a standout performance against the dynamic Eagles attack, which only managed three shots on goal despite taking 20 shots on the day.

Rosen found the back of the net again on Sunday in a 2-1 win over the Ducks. The redshirt freshman had the opener while sophomore Alex Doll put in the game-winner in the second half.

The Golden Bears of #15 California (9-3-0) also pulled off a six-point weekend with a 2-0 win over Oregon and a 3-1 win over Oregon State. Emi Lawson’s play across the back line earned her a spot on the TopDrawerSoccer.com Team of the Week.