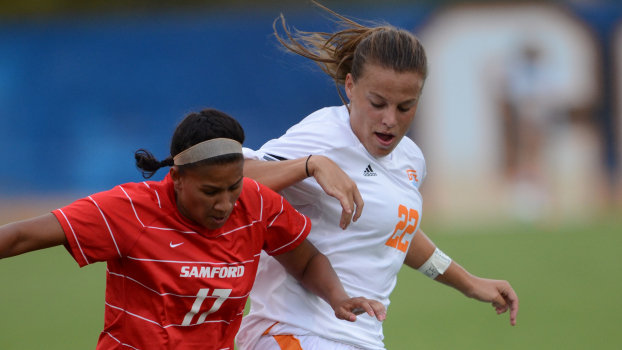 Catch up with the results from the West coast.

It couldn’t have been a more impressive opening weekend for Duke – even without some of their players on U20 World Cup duty.

Four first half goals from Cassie Pecht, Laura Weinberg, Kim DeCesare and Katy Colas paced the Blue Devils in the big win over the Tribe. Weinberg then had two, more as did DeCesare and Katie Trees in an 8-0 handing of Elon.

In the opening game of the season, the Demon Deacons had little trouble scoring goals without Katie Stengel, smashing four past the Spiders (who were without Becca Wann, on U20 duty).

Wake couldn’t grab a second win in the other game of the weekend, playing to a 0-0 draw against UNC Wilmington – although goalkeeper Aubrey Bledsoe tied the all-time school shutout record in the draw.

Senior standout Kristen Mewis paved the way to an opening win for the Eagles, as she scored a goal and set up another in the easy win.

Freshman McKenzie Meehan scored on her collegiate debut, while Patrice Vettori scored the games final goal in the 54th minute. 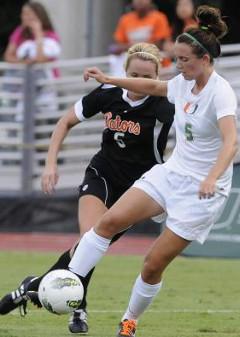 With Maya Hayes with the U.S. U20 Women’s National Team and Penn State facing two difficult opponents to start its season, it was Christine Nairn and freshman Mallory Weber (among others) who picked up the slack – and then some, as the Nittany Lions opened up with two wins.

PSU defeated Virginia 3-1 to open the season on Friday night. Freshman Mallory Weber was the star of the evening, scoring twice in the second half to put the game away. Makenzy Doniak scored for the Cavaliers.

Two early goals from Nairn on Sunday led the way for Penn State’s second win of the weekend, as she set the pace early in a 5-0 romp over St. John’s. Also getting in on the goal scoring was Erin McNulty, Britt Eckerstrom and Raquel Rodriguez.

Another prominent program coping well with absences – although this time on a permanent basis – was Georgetown. The Hoyas, who lost Ingrid Wells and Kelly A’Ambrisi (to name just two graduates) won both opening matches this weekend, a pair of 2-0 wins against George Washington and Delaware respectively.

After getting blanked in the first half against, Collen Dinn opening the scoring early in the second half, before freshman midfielder Marina Paul scored the second.

On Sunday against Delaware, sophomore midfielder Dapne Corboz was at her influential best, scoring a goal and setting up Kaitlin Brenn for the second goal in the 68th minute to seal the 2-0 win.

After the two teams played 42 minutes in the first half, a storm came into the Annapolis area, forcing a 1 hour and 46 minute delay with Maryland holding a 1-0 lead thanks to Becky Kaplan’s goal in the first half.

Once the storm passed and the game resumed, Kaplan doubled the Terrapins lead in 58th minute, before Alex Reed scored off a corner kick to round out the scoring.

Maryland couldn’t make it two wins from two games, drawing 0-0 against a tough Villanova side on Sunday. Terrapins goalkeeper Shannon Zickler made four saves in the draw.

It was quite the weekend for the Hurricanes, splitting two matches against two in state opponents.

After blitzing the Gators in the first 30 minutes to take a 3-0 lead (on goals from Paige Lombard, Kate Howarth and Tina Romagnuolo), Miami (FL) held on for a 4-1 win.

However, a visit to UCF resulted in a 1-0 loss, with Sharla Passariello’s second half goal the difference.

Brian Pensky could barely have asked for a better start to his new coaching home with a pair of wins and eight goals scored. Grabbing half of that total was midfielder Amy Harrison, who had two goals in each game as Tennessee saw off Samford and Western Kentucky.