Another week of the 2012 collegiate season is in the books and some conferences are starting to head for conference play. Other programs are looking at another week of non-conference action with some difficult opposition. Here is a rundown of last weekend’s games and some highlights from the top clashes.

Smack Down in Palo Alto

Stanford was not playing around on Sunday when Georgetown (6-1-1) brought its undefeated record into Laird Q. Cagan Stadium. The Cardinal busted off three goals in the first 32 minutes on the way to a 6-0 victory.

Mariah Nogueira and Natalie Griffen both pushed their season tallies to four goals, which is tops on the team. Goalkeeper Aly Gleason registered her third win without even having to make a save all game.

It was finally the dominant performance that head coach Paul Ratcliffe wanted out of this group.

"Today things started to click,” Ratcliffe said after the game. "And you saw what we're capable of doing." 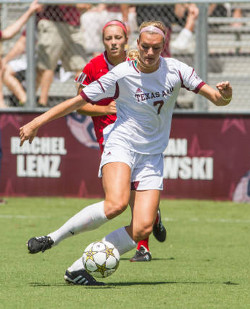 Scary news for Stanford’s next opponent, San Diego State (7-0-0). The #23 Aztecs are undefeated to start the year and have only let in one goal, which came in their last game, a 2-1 victory over Iowa State.

However, Stanford is a different level than the teams the Aztec have played this season and goalkeeper Rachel Boaz will definitely have her hands full. To make matters worse, the cardinal will be adding U.S. U20 Women’s National Teamer Chi Ubogagu to the roster this week after her World Cup winning campaign.

“I thought it was a good business-like weekend for us,” Aggies head coach G Guerrieri said on Sunday. “We had two shutout wins, and those were two wins against teams (Central Michigan and Long Beach State) that are going to win a lot more games this year.”

The Aggies have now shut out their last three opponents, which the coach attributed to the strong play of keeper Jordan Day. That shutout streak will be put to the test on Friday when the Aggies open conference play against #21 LSU (3-1-2).

“We're really thankful that we are going into the SEC compared to where we've been because there are so many team in the SEC right now with RPI probably and records above ours,” Guerrieri not so subtly remarked. “There were a lot of teams coming into today with undefeated record.”

The tally was 27 shots to 4, but the final score between #5 UCLA and Loyola Marymount was 1-1. The Bruins came back from a 0-1 half time deficit, but could not find the winner despite the huge disparity in shots on Friday.

The Bruins rebounded on Sunday with a victory over the visiting #38 Volunteers of Tennessee (5-1-1). Kiwi Rosie White scored the lone goal.

"Tennessee is a great team, and the second game of a weekend series is always difficult," UCLA head coach B.J. Snow said. "We knew we would get a tremendous effort out of an undefeated, ranked team, and I think our girls handled themselves as well as we've played all year long."

Pepperdine is coming off a surprising 0-1 defeat to Arizona State (2-4-1) on Sunday. Devin Marshall scored the winner off an assist from talented freshman forward Cali Farquharson.

The Waves will need to be a lot sharper if they hope to go into Drake Stadium and get a result on Sunday.

A Statue for Matt Potter

Renae Cuellar scored the lone goal and the Sooners held on for the 1-0 victory.

Of course, Oklahoma (4-3-1) followed up that performance with a clunker in a 0-1 defeat to Oral Roberts on Sunday.

The #7 Cowgirls bounced back from the in-state defeat to top Rice 4-0 on Sunday. Head coach Colin Carmichael highlighted the play of Kristen Kelley in the victory. Carmichael said, “Her second half performance was brilliant.”

The Huskies of Washington improved to 7-0-0 over the weekend with a pair of victories. The most impressive result came with a 3-0 thrashing of #16 Notre Dame (3-3-1) in Seattle on Sunday.

Junior forward Lindsay Elston has been the key to the attack with five goals and four assists to start the year.

Notre Dame started its Pacific Northwest swing with a 1-1 draw against Portland on Friday.

You’ve Been Gone too Long

Canada U20 Women’s National Team star Jenna Richardson finally made her return to college soccer on Friday in a 2-0 win for #29 Oregon State (6-1-0) over UC Santa Barbara. The Beavers enjoyed her reintroduction to the lineup.

“Jenna was good tonight and looking sharp,” Oregon State head coach Linus Rhode said about the Canadian. “As always she is goal dangerous and is adapting to how we are trying to play here.”

On Sunday, Richardson added her second goal of the season in the 3-1 victory over Cal Poly.

“The flow of the team is still pretty much the same as I remember so it doesn’t take that long (to get adjusted),” Richardson said. “We are working really hard at keeping the ball and taking quality chances, so being able to put one away in each game is surprising but also almost comforting to know that it’s still possible.”