The fourth week of action in women’s college soccer had a number of movers and shakers among the ranks from the west coast programs. Check out some highlights from the games from out by the Pacific below, and also a recap from the opposite coast here.

There is some trepidation with any program that starts the season hot against suspect competition, but that hesitation is gone with the San Diego State (5-0) Aztecs.

Head coach Mike Friesen’s group took a big step toward proving their capabilities on the national level with an impressive 1-0 win over Pepperdine over the weekend. 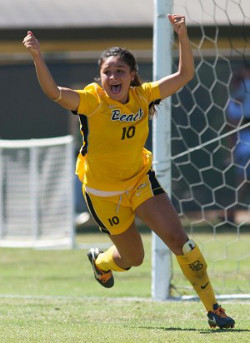 "One of the things that was exciting about tonight's win was we played very well," Friesen said after the game. "I felt like we were very dominant in the possession and had seven or eight very good chances. Pepperdine is a good team and for us to be that dominant on a night like tonight is just really rewarding."

Senior forward Megan Jurado scored the lone goal in the upset victory. It was her second game-winner of the season.

Bruins running away from field

With only a minute left in the game, the Wisconsin Badgers pushed every player forward for a corner kick in search of an equalizer.

The Bruins knocked the ball out to senior midfielder Zakiya Bywaters who raced past the high Badgers defense on her way to scoring her second goal of the season.

There probably has not been a play this season more symbolic of a team. The Bruins are running away from the competition.

With a stingy defense (three shutouts in four games) and an attack that is just waiting to break free, the Bruins are scary and only getting better.

UCLA, by the day seemingly, is adding players back to the mix from international duty.

New Zealander Rosie White was the new face to practice last week. After spending her summer with the Olympic team then the U20 World Cup squad, the sophomore forward has been with the Kiwis for the past few months.

White marked her season debut with a goal. Snow remarked after that game that it was her best performance in her Bruin career.

Next week, U.S. U20 Women’s National Team midfielders Sarah Killion and Samantha Mewis will be back in the fold as well.

The Bruins are coming.

Long Beach State head coach Mauricio Ingrassia earned his 100th win on Sunday in a 2-0 victory over the visiting Michigan Wolverines on Sunday.

Ingrassia, only in his ninth season, leads Long Beach State into its first nationally televised contest this Friday against Texas A&M (4-1-0).

The Aggies are coming off impressive wins over Rutgers and Saint Mary’s(w).

Amanda Frisbie is on fire

Amanda Frisbie scored four goals in a 5-0 win for Portland (4-1-0) over Fresno State on Friday. The outburst of goals earned her the Offensive MVP honor from the Husky/Nike Invitational over the weekend.

Keeping up this hot streak will be difficult though. Notre Dame visits on Friday in an important ranked showdown.

And another streak ends for the Cardinal.

After starting the season with a crushing 6-1 victory over Santa Clara, the Cardinal is now 1-1-1 in its last three games with an even goal differential. Perhaps the once untouchable Cardinal is now showing some weak links in its armor.

Colorado (3-0-2), under the guidance of new head coach Danny Sanchez, is off to its best start in program history.

Sanchez, who moved from Wyoming to Colorado this season, still has his work cut out for him with the competitive Pac 12, but this fast start will go a long way in terms of the confidence of his players.

Next up for Colorado, an in-state battle with Denver (3-1-1) in a tournament this weekend.

A late goal from senior Megan Marchesano helped the Cowgirls of Oklahoma State(6-0-0) defeat Memphis 3-2 on Monday and retain a perfect record to start the season.

The Cowgirls end their three-game road swing on Friday with a clash against rival Oklahoma in Norman.

The California Golden Bears held San Francisco to only one shot over 90 minutes during a 3-0 win on Sunday. The impressive defensive performance pushed the Bears record to 4-2-0 on the season.

Sophomore forward Grace Leer has been the main option in the attack with four goals and one assist to her name.

Cal was not the only program with the Bear nickname to have a good weekend. The Baylor Bears notched a 3-0 win over Nebraska on Friday and then a 5-0 win over McNeese State on Sunday.

Next up for Baylor is a clash with North Texas this weekend. The Mean Green are 5-0-0 this season with junior defender Kelsey Hodges leading the way with four goals.