In this weekend’s action in women’s college soccer, there is a matchup between two top ten programs and a four-year-old streak on the line. Plus, the new #1 team in the nation faces a difficult challenge in trying to hold onto the top spot.

The Gators are looking to claim another immense road result against the Seminoles, which can be watched live on ESPN3 at 7:00 p.m. (ET). 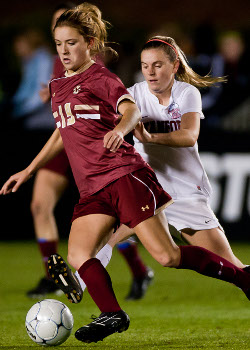 Florida State has won both of its games this season by a goal, which has put some pressure on goalkeeper Kelsey Wys to stay sharp and keep everything out of her net. The rivalry game will be likely the same and Wys will be a key player to keep the Gators off the scoreboard.

The Golden Eagles offense is red-hot right now with 10 goals in three games. Freshman McKenzie Meehan leads in goal with three senior midfielder Kristen Mewis is the supplier with three assists (and one goal).

However, the Cardinal defense is tough to break down especially at home. Stanford has only let in 11 goals at home over the last two seasons. And only once over those 29 games did the Cardinal concede more than one goal in a game.

Even more impressive is Stanford’s home-unbeaten run, which is closing in on five years. Friday’s clash against BC will be Stanford’s 60th game at Laird Q. Cagan Stadium since the 2-0 loss on October 27, 2007 to UCLA.

History is on Stanford’s side, but streaks are meant to be broken. The Pac-12 network is broadcasting this game live on Friday at 10:00 p.m. (ET).

Jordan Marada, a transfer from St. Mary’s, has been the focal point of the USC offense this season with one goal and three assists. The Blue Devils will need to slow her down to keep the hosts from coming away with a big upset on Friday.

Fourteen miles north, #4 UCLA (3-0-0) welcomes the #29 Badgers of Wisconsin (3-0-0) to Drake Stadium on Friday. The Bruins are in the midst of a seven-game home stand after starting the year with two contests on the road.

Missouri (3-0-0) charged back from a one-goal halftime deficit against California last week to claim an impressive 3-2 road win in Berkeley. This weekend, Mizzou welcomes Arizona State (1-2-0) and Tennessee Tech (1-2-1) to Columbia.

Keep an eye on midfielder Haley Krentz who is pulling the strings from the Tigers’ offense.

The Mountaineers are coming off the historic win against Stanford – so this smells like a let down game – but Penn State is not a team to take lightly in any circumstance. Plus head coach Nikko Izzo-Brown will make sure her girls are ready to go on Friday.

Defensively, West Virginia will need to be sharp to slow down Big Ten Player of the Week Christine Nairn and the rest of the Penn State attack.

Is San Diego State (4-0-0) for real? This is the all too common question to start the season with undefeated squads, but something that needs to be answered. The Aztecs have yet to let in a goal and now take on the prolific Pepperdine Waves on Friday, which should reveal the quality of this squad.

Welcome to the party, Ivy Leaguers. After sitting out the first two weeks, the Ivy League programs join the fray this weekend.

Anne Stuller is on fire. The Colorado Buffalo forward has six goals in the first three games of the season. How many will she add to that tally against Northwestern, which has let in seven goals in three games this year, on Sunday?