While it’s still early in the season, the high ranked teams will still matchup against sides looking to knock them off as women’s action continues across the country.

Top-ranked Florida State welcomes Cal State Fullerton to Tallahassee on Friday night, before taking to the road once again to play Arkansas. Tiffany McCarty, Dagny Brynjarsdottir and Kristin Grubka have all contributed significantly to the hot start. 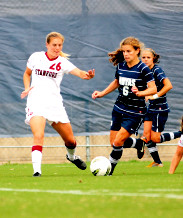 Fellow ACC side and #2 Duke doesn’t have the same unbeaten mark that the Seminoles still carry, but the Blue Devils are looking dangerous nonetheless. This weekend is going to be another test of that ranking, of course, as San Diego pays a visit to Durham for the Duke Invitational on Friday night, with the competition wrapping up for Duke against #6 Marquette on Sunday.

Two tricky opponents are making their way west to line up against the 2011 national champions and #3 Stanford. #46 Boston University has already had its share of struggles so far, but isn’t going to simply roll over, while #15 Georgetown has yet to lose a game.

Also in the Pac-12, #4 UCLA is looking to keep the good times going at home, welcoming Loyola Marymount and #35 Tennessee to Drake Stadium this coming weekend.

And while there may have been a talent drain from the Big 12 this past offseason, it’s not bothering #5 Oklahoma State. The Cowgirls get to write another chapter in the rivalry against Oklahoma this weekend, before welcoming a tricky Rice side to Stillwater on Sunday.

It’s been quite the start for #38 Washington up in the Pacific Northwest, as the Huskies have successfully navigated through an early east coast road trip to carry a 5-0-0 record into this weekend’s action. If they can emerge from two tough games, one against Gonzaga and the other against #14 Notre Dame, then it’ll send out a notice to the rest of the Pac-12.

This is an interesting matchup of two teams who lost so much after successful 2011 campaigns. So far, the Hoyas have shown the ability to cope well with weapons like Daphne Corboz bossing the midfield and others stepping up all over the field. A Sunday matchup against Stanford on the road is going to prove another litmus test for a young team.

1. For the many programs that boast talent off with the U.S. U20 WNT, this marks the last weekend without some of the best players in the nation, with the final set against Germany on Saturday morning. How the best teams cope with one final challenge without their stars is going to set the tone for the rest of the year.

2. A number of teams continue to swell the unbeaten ranks – but what teams will end the weekend there? Oklahoma State, Georgetown, Florida State, UCLA, Marquette and Louisville are among those that have won every single game. How long can it continue?

3. Early struggles appear to be in #12 North Carolina’s rearview mirror after sputtering in its first two games of the year. The Tar Heels mix it up with Marquette and San Diego at the Duke Invitational and look to put in another weekend before getting some stars back.