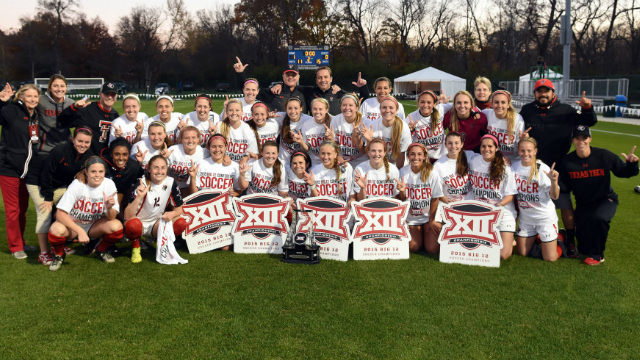 Selection Monday is officially here, as the 64-team NCAA women’s DI tourney bracket will be announced.

Over the past week, conference tournaments were contested in search of the precious (for some) automatic bids that officially secure a team’s postseason future.

Below is a recap of some of the championship games, along with each program that secured a full bid.

Penalty kicks were required in Cary, NC, as Florida State and Virginia finished deadlocked 2-2 after 110 minutes of tightly contested soccer.

In the seventh round of penalty kicks, Florida State goalkeeper Cassie Miller stopped Meghan Cox’s spot kick, and Berglind Thorvalsdottir made no mistake, blasting a shot in upper corner to secure a third straight ACC tournament title for the Seminoles.

FSU took the lead twice in the game, only for Virginia to answer each time. Natalia Kuikka scored in the 12th minute from a bad back pass from Makenzy Doniak. The UVA speedster provided the equalizer from a set piece, as her persistence paid off during a corner kick scramble in the goalmouth to tie it in the 32nd minute.

Kirsten Crowley put the Seminoles up again in the 55th minute, finishing another rebound from a set piece. Twelve minutes later, Doniak scored again to make it 2-2, eventually sending the game into overtime and the penalty shootout.

Penn State avenged an earlier season defeat to Rutgers, dispatching the Scarlet Knights 2-0 on home turf to lift the Big Ten tournament crown. Elizabeth Ball provided the perfect start for the Nittany Lions, heading home a corner kick in the ninth minute. Another of PSU’s sensational sophomores stepped up, as Emily Ogle’s blast in the 25th minute rounded out the scoring for the hosts.

After defeating No. 1 seed and Big 12 power West Virginia, Texas Tech made the upset count in the final, edging Kansas 1-0 thanks to a Gwennie Puente strike with five minutes left in the game.

Goalkeeper Lauren Watson provided a huge stop for the Red Raiders in the 28th minute, stuffing Liana Salazar’s penalty kick to keep the scores level at 0-0 and set the stage for the late win.

Serina Kashimoto’s corner kick found Jamison Midgley in the 20th minute, and that was sufficient for Butler, as it held off Providence 1-0 in Omaha, Nebraska. After both teams upset their higher seeded foes on Friday night, Midgley capped off the weekend trip, securing the Bulldogs’ first trip to the NCAA tournament in program history.

James Madison overturned a 2-0 deficit at half time, capping a 3-2 comeback to secure the CAA’s automatic bid in one of the most exciting games of Sunday.

Thanks to goals from Mackenzie Kober and Rachel Moore, William & Mary settled into a 2-0 lead after the first 45 minutes of play. Junior Ashley Herndon wasn’t quite ready for her season to end however, as she tied the score with tallies in the 47th and 75th minute. Allie Bunner cued the celebration when she found the back of the net in the 85th minute, as the Dukes held on for the unlikely win.

Defender Christen Westphal’s free kick in the later stages of the first half procured the winning margin for Florida, which sealed a regular season and conference tournament double thanks to a 2-1 defeat of Texas A&M.

Haley Pounds put the Aggies up in front 23rd minute from a Mikaela Harvey assist. The lead was short lived, as Brooke Sharp’s set piece finish five minutes later restored parity. Westphal would provide the game’s final goal in the 43rd minute, curling home a free kick from 20 yards out into the back of the net.