Quality and talent is something that the ACC has in spades, and over the weekend the opening round of action in the conference tournament reflected that notion with scintillating action all around.

Maryland, Florida State, Wake Forest and Virginia all advanced to make it to the semifinals with wins on Sunday. Aside from the Seminoles strolling past Boston College 4-0, all of the other three games were decided by one goal.

Virginia was the only program to go on the road and win, defeating North Carolina 1-0. As she has done all season for the Cavaliers, Caroline Miller came through in a big game, scoring in the 11th minute, as UVA made the early lead stand up. 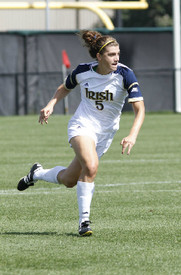 In the battle of the Carolina programs, it was a tense and tight affair throughout the matchup of Duke and Wake Forest. Marisa Park provided the game-winning goal for the Demon Deacons just 52 seconds into overtime, setting up a meeting with Maryland, which defeated Miami (FL) 2-1 in overtime.

Of course, Florida State, in the midst of a fantastic season, is the defending tournament champions and is the team everyone wants to beat at this point – but that will be far from easy.

It was easier for some programs, but every high seed survived the quarterfinals of the Big East tournament.

Marquette by far produced the most dominant score line, winning 4-1 over Connecticut (who will actually be the host of the conference semifinal and final next weekend. The Golden Eagles next take on Notre Dame, who battled through a 1-0 win against Syracuse in South Bend.

“It certainly wasn't our best performance by any means, but some of the credit for that has to go to [the Syracuse] defense,” head coach Randy Waldrum said in a press release. “We also had some chances in the first half to get the lead, and I think it would have been a different margin had we been able to pull them out of that defensive style earlier on. We did a better job of pressuring them in the second half and eventually it paid off, with Cari [Roccaro] making a very composed play to get around their keeper and the defender and then not rush her shot into the empty net. There's a lot we can learn from a game like this, but we're happy to be moving on and looking forward to the conference semifinals next weekend."

Maegan Kelly was perhaps the best player of the quarterfinal round, scoring a goal and chipping in an assist in the win for Marquette.

The other side of the bracket saw Georgetown and South Florida progress, with the Hoyas sneaking by DePaul 1-0 and USF needing penalty kicks to get past Louisville and into the semifinals.

With each passing weekend, Princeton draws closer and closer to securing the Ivy League title in impressive fashion. The Tigers latest victim in conference was Cornell, who they easily defeated 5-1 on Saturday. This despite leading scorer Jen Hoy getting only an assist, with the goal scoring coming from Lauren Lazo and Jessica Haley.

The Tigers hold a three-point lead over Penn and Dartmouth, both who kept pace with the Ivy League leaders. The Quakers needed overtime to pick up all three points against Brown (a 1-0 win) while the Big Green won their sixth straight game, a 2-0 defeat of Harvard.

Penn and Princeton play each other next weekend, and a Quakers win would open the possibility of a three-way tie for first, assuming Dartmouth continue their winning ways against Cornell.

By virtue of another unbeaten weekend in Atlantic 10 play, the La Salle Explorers grabbed the top seed in the conference tournament. A win on the road against Saint Joseph’s(w) and a draw versus Temple secured enough points to eclipse Dayton.

The Flyers had a five game winning streak snapped at home by VCU, tying the Rams 1-1, and keeping them from a shot at the top spot in the A10. The championships get under way this week, with the semifinals and final in Rhode Island.

While the top two seeds had the weekend off, the CAA tourney began in dramatic fashion, with penalty kicks required to settle both quarterfinal matchups.

UNC Wilmington and Delaware drew 1-1, with the Seahawks advancing on spot kicks after overtime. On the other side of the bracket, Northeastern tied Hofstra 2-2, with the latter advancing in the penalty kick shootout.