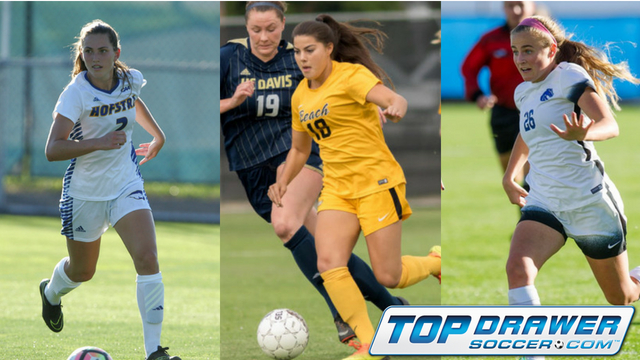 What happened in 2017: After UC Irvine won the regular season title by a one-point margin over CSUN and UC Riverside, it was fourth seed Cal State Fullerton that picked up the conference tournament crown.

What to expect in 2018: Another wide-open race should be on the cards, with UC Irvine entering the season as the preseason favorite. However, UCI did lose two formidable pieces in Noel Baham and Kiana Palacios. Long Beach State has a talented team on paper, with Ashley Gonzales back after suffering a season-ending injury last year and players like Kaitlin Fregulia, Chloe Froment and Katie Pingel back. Given the nature of the conference, CSUN, Fullerton and UC Davis have to like their chances before a ball is kicked.

What happened in 2017: Hofstra won its first conference crown since 2012 and made sure to capitalize on hosting the CAA tournament to secure a spot in the NCAA postseason. The Pride lost 1-0 to Auburn in the first round.

What to expect in 2018: While another season of Hofstra dominance seems inevitable, Northeastern has been able to create havoc in the past. The Pride bring back Madeline Anderson, who leads the team defensively, one of 19 veterans from last year’s squad that compiled a 15-4-2 record and were 9-0-0 in CAA play. There’s little reason to think that another program can mount a serious challenge, though crazier things have happened. Four programs enter the year under new head coaches, as Josh Walters takes over at James Madison, Julie Shackford at William & Mary, Chris Neal at UNC Wilmington and Katherine Vettori at Towson(w).

What happened in 2017: Rice managed to secure its first-ever outright win of the CUSA regular season title, marching to a 9-0-1 record in league play. North Texas nabbed the conference tournament crown, though the Owls had enough to secure an at-large bid.

What to expect in 2018: It should be another close race in the upcoming season, with Rice and North Texas edging the field as slight favorites. Dominique James provides a commanding presence at the back for the Mean Green, which have been one of the traditional forces in the league. The Owls return goalkeeper Maya Hower and senior forward Annie Walker, among others. Charlotte loses talismanic scorer Martha Thomas but could certainly put together a bid for the regular season crown, along with Old Dominion, Florida Atlantic or UAB.

What happened in 2017: An unbeaten conference run for Wisconsin-Milwaukee (7-0-2) helped edge Northern Kentucky (6-1-2) for the regular season crown. IUPUI and Wright State weren’t far behind either. In the conference tournament, third place finishers IUPUI upset Wisconsin-Milwaukee to advance to the NCAA Tournament.

What to expect in 2018: Three-time Offensive Player of the Year Macy Hamblin has graduated from Northern Kentucky, much to the delight of defenses around the Horizon League. Wisconsin-Milwaukee certainly looks capable of leading the charge once again, returning Defensive Player of the Year Kelli Swenson. Last year’s regular season crown marked the third straight year Milwaukee ruled the campaign, and it’s certain that they enter the new season as the team to beat.

What happened in 2017: Just when it looked like Columbia was set to clinch the Ivy League title, a defeat on the final day of the season opened the door for Princeton. The Tigers went on a nice run in the NCAA Tournament, defeating Monmouth, NC State and North Carolina before losing to UCLA one game shy of the College Cup.

What to expect in 2018: While Princeton lost some big pieces from last year’s side, they have plenty coming back, with Mimi Asom, Courtney O’Brien and Abby Givens leading the line. Columbia was also reliant on seniors, though Emma Anderson and Amaris Hemmings are back in the picture. Both Yale and Brown are going to be hungry for first place, as the two programs have steadily improved over the past couple of years.

What happened in 2017: It was another emphatic regular season for Monmouth, which won nine of 10 games in MAAC play on the way to the conference crown. The Hawks also picked up the MAAC tournament title, bowing out to Princeton in the NCAA tournament.

What to expect in 2018: Anything short of another Monmouth crown would be a surprise to the neutral observer. The team brings back six starters, so there are holes to fill, though Madie Gibson is one of several talented key returners. Manhattan finished in second place a year ago, though they were seven points back and a similar gap could be there at season’s end. Quinnipiac, Siena College, Marist and Rider could make a decent go at it if things break their way.

What happened in 2017: Kent State finished at the top of the East Division regular season standings, with Ball State taking the honors out west. However, neither side managed to win when it counted, as Toledo got the automatic conference bid, losing 5-0 in the tournament against Wisconsin.

What to expect in 2018: Another enthralling race should be on the docket during the upcoming season, though Kent State should like their chances. Defender Paige Culver is viewed as one of the best defenders in the country, and it goes a long way as the program looks to return to the NCAA tournament. Central Michigan struggled last season, though Lexi Pelafas has been a prolific scorer for her side the past two seasons. Ball State, Toledo and a reloading Bowling Green will look to make a run.

What happened in 2017: After Drake won the regular season campaign, the No. 2 tournament seed Missouri State (who also happened to be hosting the MVC tournament) went on a run to capture the at-large bid in conference. Drake had finished the MVC schedule unbeaten with a 6-0-1 mark before falling to No. 4 seed Northern Iowa in the tournament semifinals.

What to expect in 2018: It was Drake dominance last fall, and after losing some significant talent to graduation, things could open up in the new season. Alyssa Brand and Hannah Bormann are two of the key pieces back for Drake, with five starters returning. Loyola-Chicago might hold the edge on paper, bringing back eight starters and 40 of the 61 goals the team score last fall. Sienna Cruz, Jenny Szczesny are among their returning talent. However, none of Northern Iowa, Valparaiso or even Illinois State can be counted out at this point.

What happened in 2017: In a competitive campaign, it was San Jose State that emerged at the top of the regular season standings with a 9-1-1 mark. But after they tumbled in the Mountain West tournament semifinal on penalty kicks, San Diego State rose to claim the conference’s at-large bid.

What to expect in 2018: Another close regular season race should be on the docket, with San Jose State and San Diego State poised to lead the way. However, programs like Boise State, UNLV, New Mexico and Fresno State bring enough back that a surprise contender or two could emerge as the season progresses.

What happened in 2017: Saint Francis (PA)(w) and Fairleigh Dickinson shared the 2017 NEC regular season crown, each program finishing with a 6-1-1 record. Central Connecticut was right behind that with a 6-2 mark, and Bryant three points behind with a 5-3 record. Saint Francis emerged with the conference tournament crown, winning on penalties after drawing FDU 0-0.

What to expect in 2018: If last fall is anything to go by, there will be very little separating the sides at the top. It’s fair to look at Saint Francis and FDU holding the edge heading into a new campaign, but it’s too soon to count any program out. The two schools have arguably the two most talented players from an attacking perspective, in the form of Sofia Albertsson (FDU) and Alyssa McGhee (SFU). Central Connecticut lost Jennifer Cafferky, winner of the Defensive Player of the Year four years running, obviously a big blow to their chances of jumping into the top two.