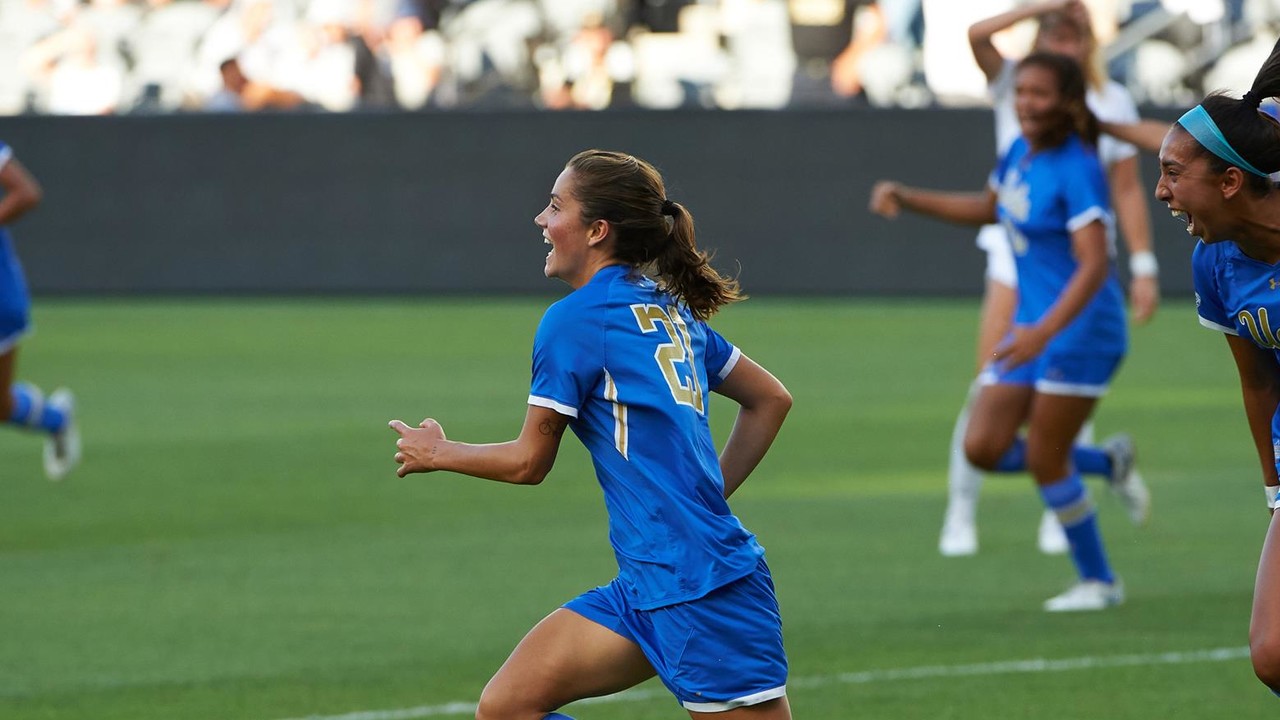 Throughout the 2019 women’s college season, TopDrawerSoccer, in partnership with The Equalizer, will keep tabs on some of the National Women’s Soccer League prospects for the 2020 edition of the College Draft.

Use the promo code ‘equalizer’ to get 30% off a one-year subscription to TDS.

Use the promo code ‘TDS30’ to get 30% off a one-year subscription at The Equalizer.

Only one round of games is left until the College Cup, with all four women’s DI quarterfinals scheduled to be played on the day after Thanksgiving.

Preview each of the matchups below. All games are Friday, November 29, kick off times listed EST.

A rematch from the regular season sees UCLA pay a visit to Tallahassee. When Florida State traveled to Los Angeles, the Bruins were able to triumph by a 2-1 score. Both teams like to control possession, and can create scoring chances from the run of play. There are plenty of similarities between the two teams, whether it’s the international caliber available to head coach Amanda Cromwell at the Bruins, or the midfielder trio of Jaelin Howell, Deyna Castellanos and Yujie Zhao.

Key matchup: Jessie Fleming vs. Jaelin Howell. The midfield battle is where this game could be won or lost, as both teams vie for possession and control of the game. Fleming’s ability to find time and space to open up chances for her teammates are crucial. Ashley Sanchez can wreak havoc in wide areas, so if Fleming can get her the ball in dangerous spots, it’s going to go a long way in determining the winner.

X-Factor: Freshman forward Mia Fishel’s found her goal-scoring form of late. If she can continue to cause problems for the Florida State back line, it could prove to be the turning point of the game, as she’ll need to be able to get the best of ACC Defensive Player of the Year Malia Berkley. For the hosts, set piece defending is crucial. This is not quite the same caliber of an FSU defensive group of past teams, as they have been vulnerable in particular from corner kicks. Keeping things on lock down in those situations will be critical for the host sides.

Despite injuries to a couple of big players at various points of the season, USC has pulled together to reach the NCAA quarterfinals for the second time in four years. The dynamic duo of Tara McKeown and Penelope Hocking has powered the Pac-12 side to this point, as the two have combined for 32 of the team’s 45 goals. Goalkeeper Kaylie Collins returned from injury late in the season, and she’ll be critical as they look to slow down North Carolina’s potent offense. The ACC champions run deep, dipping into its bench, using around 18 or 19 players a game. Fourteen difference players have chipped in at least one goal, and defensively, the Tar Heels don’t give up much, conceding just eight goals in 24 games.

Individual Battle: Kaylie Collins vs. Alessia Russo. The former missed a chunk of the season before returning in goal against California on October 18. The longer she’s able to keep Russo and the North Carolina attack at bay and a zero on the scoreboard, the better the chances of a USC win.

X-Factor: An injury sidelined Tara McKeown towards the end of the season, and while she’s returned for the past two NCAA tournament games, the USC forward is crucial to USC’s offense. Scoring chances don’t come by very often, and a clinical outing is needed from McKeown to give them a shot. North Carolina has spent the entire season with a timeshare in goal, with freshman Marzia Josephson starting most of the games, and sophomore Claudia Dickey finishing it up. That’s actually stopped as of the ACC tournament, with Dickey now getting the starting role.

After pulling off the shock of the tournament last Friday against No. 1 seed Virginia, Washington State hits the road again. This time, the destination is Columbia, for a meeting with South Carolina’s vaunted defense. The Cougars have the pieces to cause problems, as the ability of Averie Collins and Morgan Weaver are tough for defenses to handle. There is no question what South Carolina’s strength is heading into this one, as they have secured 15 shutouts on the season and have just lost a single game. If there’s a game among the quartet that is going to be tight, low-scoring and settled in tiny moments, it’s this one.

Key matchup: Morgan Weaver vs. Grace Fisk. Can Washington State’s leading scorer find a way to best Fisk and the South Carolina back line? It’s been seven games since the Gamecocks conceded a goal, going all the way back to October 27. If Weaver can find a way in this one, it will be a massive moment.

X-Factor: The usual clichés can be thrown at this game. Whether it’s set pieces, a massive goalkeeping performance, a game like this is often more for the defensive purist. That could make someone like Washington State’s Brianna Alger, and her 10 assists, extremely important. South Carolina’s strength is at the back no doubt, but goals win games. Sophomore Riley Tanner’s scored in all three tournament games off the bench, and could once again be a factor here.

The two highest-scoring teams in the country face off in Palo Alto, as the Cougars look to reach the first College Cup in recent history and somehow slow down Catarina Macario and the Stanford attack. BYU loves to throw numbers forward and get players into the opponent’s final third. If they don’t adapt that approach in this matchup, which seems unlikely, it could lead to trouble against a high-flying team

Key matchup: Sabrina Davis vs. Catarina Macario. If you’ve yet to watch Cat Macario play in 2019, this is the match to start with. Having recently hit the 30-goal mark, she’s one of the best attacking players in the college game in recent memory. If Sabrina Davis can have a magical game in goal for the Cougars, perhaps there is a chance they can keep pace with the Cardinal and pull off the road win.

X-Factor: The attention for both of these teams is going to be fixed on the attack, and with good merit. Whether it’s Macario, Madison Haley or Sophia Smith, there are a number of candidates the Pac-12 side can call upon. And for BYU, it’s Elise Flake, Cameron Tucker and Mikayla Colohan that can put up numbers, to name a few. So maybe it will be a defender, from either side, that makes a match-winning play or scores a goal. Stanford’s Kiki Pickett or Samantha Hiatt are two options for the hosts, while Josie Guinn scored just the second goal of her career in BYU’s third round victory. Or there’s BYU senior Alyssa Jefferson that could make a decisive play.

With Lyon’s purchase of Reign FC now public, how will that change the mock draft this week?

No. 1 pick: Orlando (Jessie Fleming, UCLA): Here’s the scenario that came to my head last night...what if Catarino Macario goes pro, signs with Lyon, and then is loaned to Reign FC for at least a portion of the season? Reign FC and Lyon certainly both benefited from doing that with Megan Rapinoe in the early days of NWSL.

If Macario does go pro outside of NWSL, and if Fleming decides to stay state-side, too, Fleming is a great consolation prize in a position of need for Orlando.

Fleming had two shots, one on goal, in a pair of shutout wins for UCLA over the weekend, helping the Bruins to the Elite Eight.

No. 3 pick: Sky Blue FC (Tziarra King, NC State): Forward is a position of need and the New Jersey native would be a great fit.

She managed to get nine shots off in the Wolfpack’s two NCAA Tournament games last weekend, including four on frame in NC State’s loss to BYU.

She scored in the Aggies’ 2-1 loss to USC in the second round.

No. 5 pick: Utah Royals FC FROM Chicago Red Stars (Elise Flake, BYU): Our first trade sees Utah moving up to take the BYU product, whose stock has been on the rise the last few weeks. The Red Stars get Utah’s first-round and second-round picks next year in return.

Flake had a goal and an assist, taking 12 shots, five on target, in the Cougars’ two wins.

No. 6 pick: Chicago Red Stars (Evelyn Viens, South Florida): Viens fired a brace in a win over Washington before being held to one shot by Florida State in the Bulls’ 2-1 Sweet 16 loss.

No. 7 pick: Portland Thorns (Julia Bingham, USC): Bingham and the Trojan defense are in the Elite Eight after allowing only one goal last weekend.

No. 9 pick: North Carolina Courage (Kaiya McCullough, UCLA): Two clean sheets, two wins and a trip to the Elite Eight for McCullough and the Bruins.

A pick for everyone else:

Houston Dash (1st pick at No. 12): Colorado’s Taylor Kornieck took two of the Buffaloes’ five shots, and the only one on goal, against North Carolina.

Washington Spirit (1st pick at No. 23): Meghan McCool from Virginia. The Cavaliers had a surprising exit in the second round to Washington State, but it wasn’t McCool’s fault, as she finished with a goal and an assist.

Reign FC (1st pick at No. 24): With Theresa Nielsen leaving, Reign FC once again has a need at outside back. Kristina Schuster from NC State is a possibility.