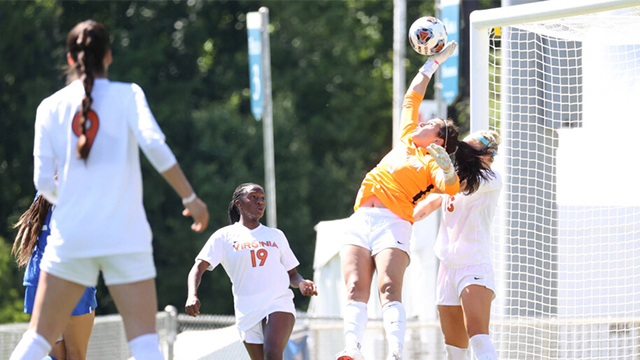 The Women’s DI Tournament continues on Thursday with eight third round games at various sites throughout North Carolina. Preview all matches below.

After winning two straight penalty shootouts in the first two rounds, Mississippi eyes another victory against a top-level opponent. This time, Duke provides the test. Goalkeeper Ashley Orkus has been huge in Ole Miss’ push, keeping her side alive in both games against Bowling Green and USC. She’ll need to be sharp against the likes of Sophie Jones, Tess Boade and Delaney Graham, all who are more than capable of creating dangerous opportunities. Haleigh Stackpole, who had a goal and assist against USC, and Channing Foster, are the two key offensive players Duke will need to slow down.

An SEC vs. Big 12 showdown in the third-round pits two formidable sides against one another. Oklahoma State have shown plenty of balance, getting goals from Grace Yochum and Olyvia Dowell on a regular basis, while Kim Rodriguez locks things down in the back. The focus for the Ok State back line has to be on SEC Freshman of the Year Barbara Olivieri, who continues to score big goals for the Aggies.

Two former national champions square off against each other in the third round, both with plenty to prove. Penn State haven’t played a non-conference game before the tournament, dominating the Big Ten this spring before slipping up against Iowa. Florida State played their first competitive match of the spring last week, a comfortable 3-0 win against Wisconsin-Milwaukee. It’s a big step up in opposition for both, and a chance for both the collective and individuals to sign. Sam Coffey’s performance against Jaelin Howell here could determine the winner; the Portland Thorns draftee can really show her quality with a big performance. Bringing in Yujie Zhao, Jenna Nighswonger and Jody Brown off the bench worked in the fall, and in the spring game. With the stakes high, it will be interesting to see if that continues.

After a comfortable first round win against Liberty, Washington survived a penalty kick shootout against a very good Saint Louis side to setup this matchup with the Tar Heels. High level games in the Pac-12 should have the Huskies braced for this one, even if Summer Yates remains on the sidelines as she has for the first two games of the tournament. Locking down set pieces will be crucial, as that’s how North Carolina found a pair of goals against a determined Denver side.

Can a stout defensive Georgetown side slow down a potent TCU offense? That’s the big battle as these two programs size each other up and seek a quarterfinal spot. The Hoyas needed a heroic goal from Jenna Menta to get past South Carolina, and TCU is another big step up in opposition quality. Giavanna Vicari is a player to watch, as the top scorer for Georgetown was unable to get off a shot versus the Gamecocks. TCU have the ability to send a number of players flying forward, whether that’s Yazmeen Ryan, Grace Collins or Messiah Bright. The latter missed a chunk of the season and her return could be an X-Factor here.

Reilyn Turner rode to the rescue in the second round for UCLA, scoring two goals in the game’s final five minutes to avoid an upset against Iowa. It was far from the Bruins at their best, although they created enough chances and were a touch unlucky prior to Turner’s heroics. There’s no doubt they need to be better against a Clemson side that’s battle-tested and will be difficult to beat. Clemson’s only conceded two goals in two of their 17 games, and will no doubt be able to keep this close even if UCLA gets on the board early. Megan Bornkamp and Caroline Conti provide consistent offensive threats, while Maliah and Makenna Morris could have the pace to track Turner and teammate Mia Fishel.

A dynamic attack in the form of Santa Clara lines up against a well-rounded Arkansas side in what could shape up into a high-scoring affair. Kelsey Turnbow, Izzy D’Aquila and Julie Doyle will look to solve a relatively stout SEC defense, anchored by Haley VanFossen. However, the Razorbacks counter with Anna Podojil, one of the top goal scorers and chance creators in women’s DI soccer. Alexis Loera’s ability to slow down the Arkansas offense could end up being where this one is decided.

If Rice is to pick up another win, it’s going to take a similar defensive effort put forth in the second round: outshot 20-1, the Owls converted a second-half impact to secure progress. There’s a strong argument that Virginia’s attack is even better, so Rice will need to account for Alexa Spaanstra, Lia Godfrey and Rebecca Jarrett to keep things close. The NCAA tournament continually shows that anything can happen, and Delaney Schultz has shown that she’s in solid form going forward. The Owls have the defensive chops and form to get this done. They've conceded one goal in the last 10 games and haven't lost since March 11 against Houston.