Putting perspective on Florida State’s season is difficult. The Seminoles have been so dominant lately that any form of hyperbole would not do their accomplishments justice.

Simply saying the facts, for instance that Florida State (12-0-0) has only let in one goal in its last 11 games, almost seems too bland to explain how difficult that is in the most daunting conference (the ACC) in the nation.

For the Seminoles, the exaggeration and historical records are white noise. The stars of the Sunshine State just keep churning out results.

“I thought it was a solid performance,” head coach Mark Krikorian said last week after a 7-0 win over Clemson.

The Other Top Five in Action: 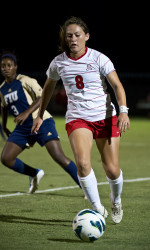 The #2 Stanford Cardinal (11-1-1) heads to the desert for a clash against Arizona (4-6-3) on Thursday. Despite the sub .500 record, the Wildcats have played some good teams close this season including a 1-2 loss to UCLA only a couple of weeks ago. The game in Tucson could be closer than many expect.

The other bully of the Pac-12, #3 UCLA (11-0-2), heads up to the beautiful Pacific Northwest for a game against #33 Washington (9-3-2) on Friday. The Huskies are undefeated at home with a 4-0-1 record. The game in Seattle wraps up UCLA’s road contests for the year with the rest of the slate at Drake Stadium.

Penn State (12-2-0) continues to hold the distinction as the top offense in the nation with a 3.29 goals per game average. Christine Nairn and Maya Hayes lead the way for the Nittany Lions with a combined 20 goals between the two of them.

This weekend presents an important conference road swing for #4 Penn State with games against Nebraska (6-7-1) and #32 Iowa (11-1-3). There is little room for error though with Michigan (11-2-1) only two points back.

In ACC action, #5 Wake Forest (10-3-2) travels to #11 Duke (10-3-1) on Sunday. The Blue Devils are actually one spot ahead of the Deacons in the conference standings due to playing an extra game, so Wake could skip into third with a win.

The Blue Raiders are tied for the top spot in goals per game this season with Penn State. The high output, not surprisingly, has helped Middle Tennessee (11-3) to a perfect 6-0 record in Sun Belt play. The Blue Raiders take on Troy University (6-8-1) and South Alabama (7-6-2) this weekend.

The Hoyas and Irish are tied for the top spot in the National Division of the Big East with only three games remaining. Both teams have already clinched a spot in the conference tournament, but Friday’s showdown will go a long way in determining the league champion.