These sides are no strangers to each other as two of the most prominent sides on the west coast, and given the Cardinal’s status as defending champions, it’s fair to say the Broncos will get up for this game. 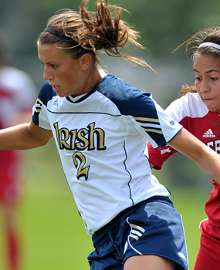 Whether or not they can keep it competitive is another thing, as even with a team not quite at the same level as 2011, Stanford is a very dangerous attacking side, led by Cortney Verloo, Chioma Ubogagu and Mariah Nogueira. The two teams already met earlier in the year, with Stanford winning that 6-1 – the ramifications and result on the upcoming matchup will be one of many things to look out for.

The Nittany Lions are good in several parts of the field, but they are perhaps the best offensive team in the nation. Senior Christine Nairn, alongside the likes of U20 forward Maya Hayes and Mallory Weber, are just three of the dangerous players the Eagles will have to stop.

But Boston College is no slouch in the scoring department – senior forward Kristen Mewis (13 goals, 11 assist) is the focal point, with Stephanie McCaffrey and McKenzie Meehan providing compliments to her. While the result is hard to guess, one thing is likely in this matchup: lots of goals.

Talk about a second round matchup. The 2010 national champions meet a College Cup team from a year ago, with both programs boasting quite the lengthy resume and pedigree.

While the Irish are probably lacking slightly in the experience department with 12 freshmen on the team, Mandy Laddish and Cari Roccaro hold things down in the middle of the park for Notre Dame. They’ll be a part of the effort to try and shutdown Wake’s key offensive threat, forward Katie Stengel.

Third round matchups that would be notable:

It’s hard to predict how things may end up coming, but looking ahead to possible third round matchups – to be hosted at the highest seed in the quartet of teams – there are some possible high clash matchups.

Florida State, which has cruised at times during the season, and struggled at a couple of points, looks on course for another College Cup spot. But if the results fall the right way, a third round date against a plucky, determined, and most importantly talented Texas A&M side could provide a very early examination.

An early collision course for two ACC rivals is staring them right in the face, as Duke and Virginia could potentially meet for the second time this season. The Cavaliers won that meeting, and with a late season push to an ACC tournament title, have laid down a statement of intent as national title contenders. This weekend will seriously put those aspirations to the test.

One of the best teams to get handed a rather unkind draw in the tournament was Georgetown. The Hoyas have a second round date with Baylor (who were mysteriously sent on the road, despite being seeded) in Chapel Hill. No offense to the Bears, but if the Hoyas and exciting playmaker Daphne Corboz can setup a third round matchup with North Carolina, it would make for must-see soccer.

The best players in the nation crave the spotlight and tests provided by this stage, the do-or-die segment of the season. For some seniors, it’s the one last chance to play competitive soccer, as the post-college future for some players remains murky.

That is part of the reason this segment of the season is so compelling, as the true stars rise. Virginia has already seen midfielder Morgan Brian come on of late, scoring her first goals of the season in the ACC tournament. North Carolina boasts a number of incredibly talented young attackers, among them Summer Green, hands down one of the best players her age, who will look to keep the Tar Heel championship dream alive.

How good is the ACC… really?:

This is a question that is bandied about throughout most of the college soccer season, and after seven of the nine ACC sides advanced last year, at the end of this weekend, a clearer picture is set to emerge.

Along with the aforementioned matches for Wake, Florida State, North Carolina and BC, Maryland might end up facing the defending national champions, while the others try and fight for survival.

No matter what happens, the quality won’t be brought into question – blanket statements can’t be made off one result here or there – but it’s going to give a better picture if the Terps and Eagles are still in this thing on the other side of the weekend.