Baylor did a few teams a favor on Sunday with its 4-1 win over TCU. The Horned Frogs (7-10-4) had pulled off a few upsets and found their way into the Big XII Championship, which meant a win for TCU would’ve given the sub .500 team a spot in the NCAA Tournament via the automatic bid.

Yet the Bears did not disappoint and walked away with the program’s first Big XII Championship since the conference started its tournament. In fact, the Bears had not won a conference tournament game prior to last week’s three-game winning streak.

Baylor senior forward Dana Larsen was named the Big 12 Conference Tournament Offensive MVP and also grabbed a spot on the TopDrawerSoccer.com Team of the Week. 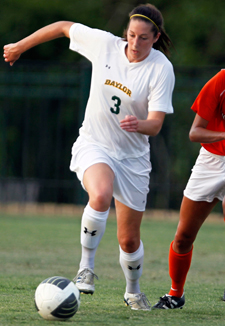 The #6 Bears are one of the hottest teams in the country over the last month with a six-game winning streak heading into the Big Dance. Baylor is also riding an 18-game undefeated streak as well.

Rachel Tejada’s decorated career just keeps getting better. The sophomore striker for Illinois State is already the two-time Missouri Valley Conference Player of the year, and added MVC Tournament Most Valuable Player to that tally on Sunday with her three-goal, two-assist performance.

Tejada already ranks second all-time at Illinois State in goals, assists, and points. It might take another year, but she is well on her way to taking the top spot in all of those categories.

She enters the NCAA Tournament with 18 goals and 10 assists to her name in 2012, which ranks in the top five in the nation for total points.

Utah State entered October with a 5-2-6 record and a lot of ground to make up in the Western Athletic Conference race. On Sunday, the Aggies were crowned back-to-back WAC Champions after a 1-0 win over Denver.

“What can you say? That was awesome,” Aggies head coach Heather Cairns said after the game in a release. “To be able to win that on our home field, with so many fans, the fans were incredible.”

The victory was the eight-straight win for Utah State, which has only let in three goals during that stretch.

Cairns, in her tenth season, has now led the Aggies to back-to-back tournament trips – the only appearances for the program in the NCAA Tournament.

Senior defender Natalie Norris was named the Most Valuable Player of the WAC Championship, which should go along nicely on the mantle with her two WAC Defensive Player of the Year awards.

History is Golden for Matadors

A golden goal by Melissa Fernandez in the 92nd minute sent Cal State Northridge(w) to the NCAA Tournament for the first time in program history. Fernandez’s strike in overtime was the deciding factor between the Matadors and Cal State Fullerton on Sunday in the Big West Championship.

Northridge finished the season with a run of nine games without a loss including wins in six of the last seven contests. Head coach Keith West clearly has this team and the program heading in the right direction in his seventh season in charge.

With no conference tournament in the Pac-12, there was little drama in the final weekend of the regular season, as Stanford had already wrapped up its title the week prior.

Instead, there were a couple of rivalry games with nothing on the line as USC faced UCLA in the battle of Los Angeles schools and Stanford took on California.

In the Southern California showdown, USC’s Jordan Marada scored her fifth goal of the season with three seconds left in the first overtime period to give the Trojans the win over the Bruins. It was only the fourth win for USC in 22 games.