Women’s Team of the Week: February 9 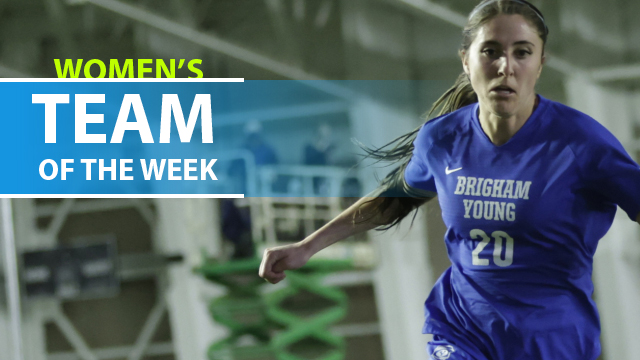 The BYU high-powered attacked picked up where it left off in 2019.

Debuting against Pac-12 side Utah in the spring season, the Cougars dropped five goals on the Utes in last week’s 5-1 triumph on Saturday in Herriman.

Cameron Tucker paved the way with a hat trick, netting the spring’s first Player of the Week nod from TopDrawerSoccer. She opened the scoring five minutes into the game, and eventually helped her side break the deadlock when Rachel McCarthy scored the eventual game winner off a saved effort from Tucker. The forward added the fourth and fifth goals of the night to put the game away.

The Team and Player of the Week will return all spring long through May, honoring some of the top performances in men’s and women’s Division I soccer. Submissions can be sent at any point to college@topdrawersoccer.com.

Check out some of the other top performances from the past week of action in women’s Division I soccer.

Team of the Week: February 1-7

GK Mia Krusinski, FGCU – An eight-save effort in her college debut helped the ASUN side beat Utah Valley in a narrow 1-0 win in overtime.

D Chai Cortez, Oregon – It was a winning debut for the Ducks against Gonzaga, as a goal setup by Cortez earned the victory. The outside back played 90 minutes in the 1-0 triumph, the first at Oregon for new head coach Graeme Abel.

D Chloe Fell, North Alabama – The defender augmented the game-winning in a 4-1 win against Western Kentucky with an assist on the third goal, as the ASUN side enjoyed a winning start to the spring.

D Sydney Studer, Oregon State – Along with scoring the second goal of her team’s 3-0 win on the road over Idaho, Studer anchored a defensive effort that limited the Vandals to just two shots on goal.

M Marley Canales, UCLA – After tearing her ACL early in the 2019 season, Canales was back in style in Sunday’s 3-0 win against Pepperdine. She picked up a hat trick of assists as the Bruins opened up the spring season with the victory.

M Laurel Landry, Central Arkansas – Landry’s 2019 was cut short due to injury, and the Texan was fit and firing in UCA’s 5-2 shootout win over Oral Roberts. She setup the game’s first goal and bagged what turned out to be the game winning goal in an impressive road performance.

M Tanya Boychuk, Memphis – The junior scored and setup another as the Tigers put together a 3-0 win against UAB to open up the spring portion of the campaign.

M Hannah Larson, Saint Louis – It was a long-awaited debut for the freshman, who scored a goal and setup another as SLU overcame conceding an early goal. The Billikens emerged as 4-1 winners despite giving up a goal in the 14th minute to UMKC.

F Kylie Sprecher, Marquette – Sprecher made her presence felt in a pair of wins for the Golden Eagles, amassing two goals and an assist as the Big East side began 2021 by defeating Chicago State and Illinoi State.

F Cameron Tucker, BYU – It was a huge 2019 for Tucker, who scored 12 goals as a junior. Like her team, she picked up where she left off with the hat trick, which was the mark she reached as both a freshman and sophomore.

F Nicole Douglas, Arizona State – The junior from England made it a close race for Player of the Week honors. Douglas scored five times for ASU in wins over UTEP and New Mexico State.