Women’s Team of the Week: First Round feats 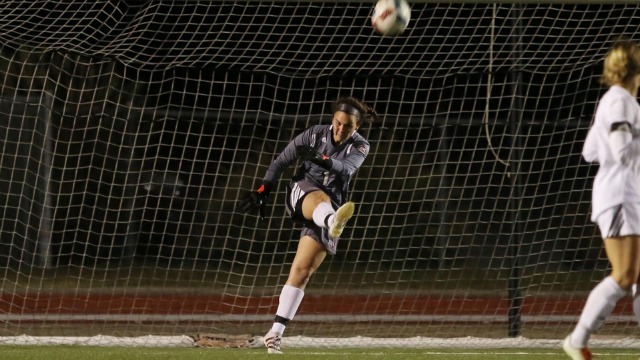 At this stage of the season, every game could be the last one.

The first round of the NCAA Tournament has come and gone. While several of the top seeds progressed, there was a smattering of upsets around the nation.

One of those took place in South Bend, as SIUE held on for a shootout win against Notre Dame on the heels of a 0-0 draw.

Goalkeeper Julie Rossi captures the latest Player of the Week nod with her endeavor in the Cougar goal, making eight saves and then standing tall in the shootout to advance.

See who joins her on the team below.

GK Juli Rossi, SIUE – Rossi’s eight saves in a 0-0 draw against Notre Dame set the table for the Cougars to pick up a 5-4 shootout win over the ACC opposition.

D Natalia Kuikka, Florida State – Along with playing the full 90 minutes in a 4-0 win against Samford, Kuikka setup three of Florida State’s four goals as the ACC champions marched on.

D Kayla Morrison, Kansas – Played all 101 minutes as the Jayhawks defense kept a clean sheet in a narrow 1-0 overtime win against Missouri.

D Paige Welch, Oklahoma – The defender scored the long goal of the Oklahoma’s first round match against SMU, heading home the winner in the 12th minute. She helped ensure that the goal stood up, as the Sooners shut out the Mustangs the rest of the way.

M Rose Lavelle, Wisconsin – Showed up in a big game, scoring the lone tally in Wisconsin’s 1-0 first round victory against its nearby rivals Marquette.

M Stephanie Ribeiro, Connecticut – With her goal and assist in a 4-2 victory against Albany, Ribeiro not only fired the Huskies to a tournament win, she also kept herself in the running for the nation’s top scorer.

M Brooke Ramsier, Auburn – On the score sheet three times in a comfortable win over South Alabama, Ramsier scored twice and setup a third goal as the Tigers won 4-0.

M Ricarda Walkling, NC State – While the midfielder missed a chunk of the game in the second half, Walkling was back on the field against Minnesota, in both overtimes, converting the decisive spot kick as the Wolfpack advanced in the NCAA Tournament for the first time since 1995.

M Lindsey Mayo, Arkansas – In the dying minutes of a potential 1-0 loss, Mayo was in the thick of a goal-mouth scramble eventually turned home by Jessi Hartzler. She then stepped up to score the game-winning goal in overtime, as Arkansas topped Memphis by a 2-1 score.

M Nikki Walts, Ohio State – With two second half goals, Walts propelled the Ohio State Buckeyes to a 3-2 win against in-state rivals in one of the best matchups of the first round.

F Maddie Gonzalez, Santa Clara – Found the back of the net twice in a 3-0 victory against Long Beach State, lining the Broncos up against longtime rivals Stanford in the Second Round.