Women's Team of the Week: March 16 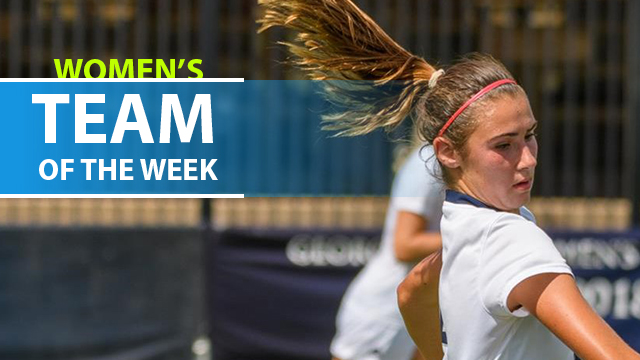 The Georgetown Hoyas are rolling six games into the season.

With the Big East split between Midwest and East Divisions, Georgetown has spun off four straight conference wins to open the season, and six overall.

A sophomore anchored two big wins in the conference over the past week. Giavanna Vicari scored and assisted in a 2-0 win on the road against Villanova, and then assisted on the lone goal in a 1-0 victory at home turf versus St. John’s. All this while coming in off the bench to help the Hoya attack in her sophomore season.

Check out some of the other top performances from around Division I women’s soccer over the past week.

GK Peyton Pearson, Kansas State – Pressed into action once again, Pearson lands on another Team of the Week in the wake of a five-save effort against in-state rivals Kansas. It was just her second appearance for Kansas State in her college career.

D Zara Siassi, North Florida – The freshman logged a 90-minute performance against FGCU, anchoring a shutout in a massive 1-0 win for the Ospreys. They are off to a 6-0 start to the season.

D Trinity Watson, Pepperdine – A dominant performance from the Waves saw Watson score twice in an easy 6-1 win against Pacific.

D Maya Lambert, Purdue – A senior center back for the Boilermakers, Lambert back-stopped a pair of shutout wins last week, including a 2-0 win over Wisconsin on March 8. Over the weekend, she assisted on the game-winning for against Northwestern as Purdue picked up a pair of much-needed wins.

M Grace Yochum, Oklahoma State – Perhaps the wildest game of the past week, Oklahoma State managed to defeat North Texas by a 4-3 in overtime despite playing down a player for a significant portion of the game. Yochum scored twice, including the winning goal.

M Julie Doyle, Santa Clara – The attacking midfielder scored the winning goal as the Broncos bagged a huge 2-1 win away from home against BYU.

M Jessica Mazo, Connecticut – Mazo assisted on the lone goal of the game during last Thursday’s 1-0 win against St. John’s. The sophomore then scored twice in a 5-0 defeat of Seton Hall as UConn’s successful return to the Big East continued.

M Delanie Sheehan, UCLA – Heading for a two-game road swing at altitude, Sheehan helped push UCLA to wins in Colorado and Utah. She scored the lone goal of the game in Friday’s 1-0 win at Colorado, and anchored the team’s midfield in a 2-0 defeat of Utah this past Sunday.

F Marcy Barberic, Buffalo – MAC play is rolling right along, and Buffalo secured a second straight win this past time. This time it was a big tilt against perennial conference leaders Bowling Green, and two goals from Barberic ensured the home side would come away with the three points.

F Nailah Harpring, UNLV – It was a sensational week for the freshman, who had a hand in all five of UNLV’s goals on a road trip to California. She scored and earned an assist in a 3-2 defeat against Fresno State, and then bagged a hat trick in Sunday’s 3-0 win over San Jose State.

F Giavanna Vicari, Georgetown – A sophomore from Pennsylvania, Vicari’s been an early answer to Georgetown goal-scoring question through the first few weeks of the spring campaign. She’s scored five times and added a pair of assists in her six appearances, including last week’s production.