Women’s Team of the Week: May 4 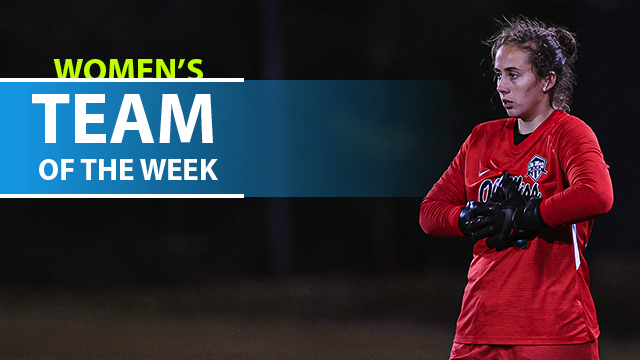 The SEC side was one of five unseeded squads to survive to the third round of the women’s Division I tournament.

Orkus went far and away beyond securing the wins in two shootouts. She earned a shutout in a 0-0 draw against Bowling Green in the first round, making three saves in 110 minutes. After advancing on penalties, Orkus delivered in an even bigger fashion against USC. With her team down 2-0, she made a couple of big saves to preserve the deficit (even after giving up a tough rebound on the second USC goal). She made a total of 11 saves, including a penalty kick stop in the first overtime that could’ve won the game for the Pac-12 side.

The moment that sent @OleMissSoccer to the Sweet 16!

Check out some of the other top performances from the past week of Division I women’s tournament action.

GK Ashley Orkus, Mississippi – The SEC Goalkeeper of the Year had a massive pair of performances as her strong 2020-21 season continued.

D Eva Alonso, Penn State – After blanking Alabama State in the opening round, Penn State secure a second shutout in a row, beating Vanderbilt by a 2-0 score. Alonso anchored the two shutout wins and scored the insurance against versus the Commodores.

D Abby Allen, North Carolina – The freshman defender helped the Tar Heels blank Denver by a 2-0 score. She opened the scoring in the first half with a brave header from a set piece chance.

D Mary Johnston, Washington – After helping her side blank Liberty to open the tournament, Johnston played the full 110 minutes in a 0-0 draw versus Saint Louis. The Huskies are alive after a penalty kick shootout victory.

M Grace Yochum, Oklahoma State – It was an offensive barrage by Oklahoma State, winning by a 7-0 score against South Alabama. Youchum’s two goals and assist were both key in the big day.

M Delaney Schultz, Rice – Rice pulled out a famous win in particular in the second round, as Schultz’s game-winning goal from the penalty spot knocked out West Virginia. Schultz also had a pair of assists in a 3-1 win in the first round versus Furman.

M Alexa Spaanstra, Virginia – Nearly as deserving of a Player of the Week nod as Orkus, Spaanstra bagged two braces as Virginia bested SIUE in the first round and then BYU by a 2-0 score on Saturday.

M Sophie Jones, Duke – Jones punctuated a strong passing performance (she completed 87% of 71 passes) with the game-winning goal in overtime as the Blue Devils best a good Arizona State side.

F Barbara Olivieri, Texas A&M – The freshman’s stellar season continued into the spring, as she scored twice in a 2-0 defeat of South Florida.

F Reilyn Turner, UCLA – Just when it seemed like Iowa was about to pick up another big upset win, Turner swooped in for the rescue act. She scored two goals in the final five minutes to secure the 2-1 victory for UCLA.