Women’s Team of the Week: November 20 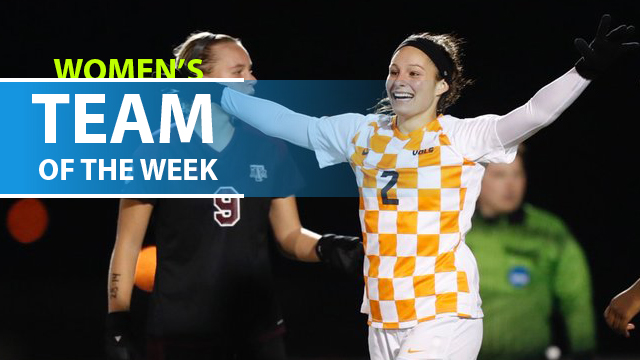 Goals at this point of the season can’t be understated for their importance.

Whether it’s an early game to set the tone or a late winner, it goes without saying that offensive contributions in the NCAA tournament are vital to staying alive.

Tennessee forward Danielle Marcano picked the best time of the season to score back-to-back braces. After scoring a late winner in Friday’s 3-2 win against Arizona in the second round, she opened the scoring three minutes into the all-SEC clash with Texas A&M on Sunday.

When the dust settled at home, Marcano had two more goals and the Volunteers a 3-0 win against the Aggies. It all adds up to a Player of the Week nod. Check out some of the other top tourney performers in DI women’s soccer below.

GK Kaylie Collins, USC – Despite coming up short in the penalty shootout, Collins was spectacular in Sunday’s third round match at Florida State. She made nine saves in 110 minutes against the Seminoles, to go with a shutout in Friday’s match versus LSU.

D Julia Ashley, North Carolina – The senior right back continues to play a big role in UNC’s attack. Along with her contributions in the defensive part, Ashley had four assists in North Carolina’s wins against Kansas and Virginia Tech.

D Kaleigh Riehl, Penn State – Her brilliant season continued over the past week, as Riehl anchored two 1-0 wins against South Carolina and Wake Forest. She was credited with an assist on the game-winning goal against the Gamecocks.

D Meaghan Nally, Georgetown – In their two wins last week, the Hoyas showed they can win close games and blow out opponents. In Friday’s 1-0 win against Washington State, Nally scored the winning goal. She then keyed her side in a 4-1 win over Duke on Sunday.

D Naomi Girma, Stanford – While the freshman’s been overshadowed by some of her more talented teammates, Girma showcased a finishing touch from set pieces in Friday’s win against Ole Miss. She scored a pair of goals in a 4-1 victory, and then anchored a 1-0 shutout win over Wisconsin on Sunday.

M Meghan Flynn, Tennessee – With Marcano busy applying the finishing touch, Flynn was active in the buildup. She notched four assists across the two games.

M Julie James, Baylor – Beating Vanderbilt and Virginia at home over the weekend, the Bears are a step away from the College Cup. James scored a goal in each game to keep the Big 12 still in the final eight.

M Jessie Fleming, UCLA – Through three tournament games (two over the last week) the Bruins have scored 15 goals and conceded none. Fleming’s play is one small part of the success, though the Canadian national teamer is back to her brilliant best. After taking a backseat in Friday’s win against Minnesota, she scored the game’s first two goals in a win over NC State. With Fleming in the lineup, the Bruins are a perfect 10-0.

F Ashley Sanchez, UCLA – Starting slow in 2018 after missing the opening weekend on duty with the U.S. U20 WNT, Sanchez is on a tear of late. She’s scored a goal or assist in 12 straight games. That includes a whopping six assists last week against Minnesota and NC State.

F Danielle Marcano, Tennessee – Considering the attention that Bunny Shaw draws, it’s paramount that other Volunteers step up in the final third. Marcano did just that last week, more than doubling her goal total on the season, going from three to seven in the span of two games.