Women's Team of the Week: October 30 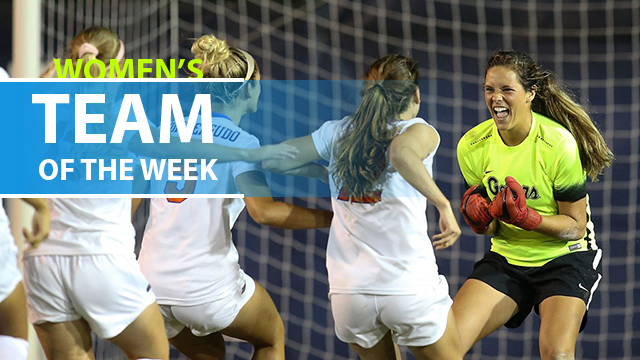 While the 2018 season may have not gone the way Florida imagined it, the past week saw its senior goalkeeper help keep things alive.

Kaylan Marckese stopped three penalties in shootout at the end of Sunday’s SEC tournament first round match against Auburn. She also converted her own opportunity, as the Gators survived to face top-seeded Vanderbilt on Tuesday.

Prior to that, Marckese made three saves in last Thursday’s 3-0 win against Arkansas, a victory that made Sunday’s match possible. It’s a long road to go in the tournament, Florida’s lone chance of making it to the NCAA tournament, but the program does have a certain pedigree.

Check out some of the other top performances from the past week.

GK Kaylan Marckese, Florida – If Florida is going to make the NCAA tournament, it’ll only happen with a SEC tournament title. And thanks to Marckese, the Gators are still alive heading into Tuesday, after she made three saves on penalty kicks and converted one of her own. She also

D Julia Ashley, North Carolina – Once again the senior right back was an immense part of two shutout wins over the past week. Ashley notched the assist on the game’s only goal in a 1-0 win over Wake Forest last Thursday. She logged the full 90 minutes in North Carolina’s 2-0 win in the quarterfinals of the ACC tournament against Virginia Tech as well. It’s been more than five games since the Tar Heels have conceded a goal.

D Karina Rodriguez, UCLA – A second half surge continued for UCLA last week, which won both games of a swing to Colorado and Utah. Rodriguez scored a goal against the Utes and limited the Buffaloes as the Bruins won 2-1 on Sunday in Boulder.

D Cassandra Hiatt, Texas Tech – After back-stopping her team’s defensive effort in a 1-0 win against Texas to wrap up the regular season, Hiatt played 110 minutes in a 0-0 draw in the Big 12 conference quarterfinals. Her side triumphed 5-4 on penalties to advance to Friday’s semifinals.

D Monique Ianella, Hofstra – Thanks to a tremendous defensive effort over the weekend, Hofstra is one game away from a CAA conference championship. Ianella played every minute in two 1-0 wins on the road against Delaware and Northeastern to advance to next weekend’s final.

M Molly Fiedler, Minnesota – One of the most notable upsets of the conference tournaments that kicked off over the weekend was Minnesota’s 1-0 win at Rutgers. Fiedler helped engineer the game’s lone goal, and helped her side limit the Scarlet Knights to just four shots.

M Julie James, Baylor – The senior midfielder helps her side keep things ticking over for the Big 12 regular season champions, and she helped her team wrap up the title in a 1-0 win last Thursday. On Sunday, James notched a goal as the Bears cruised to a 3-0 win against Iowa State in the Big 12 conference tournament quarterfinals.

F Marleen Schimmer, Arizona State – Another team peaking at the right time, Schimmer powered Arizona State to wins on the road against Oregon and Oregon State. She scored three times, including a dramatic overtime winner in Thursday’s victory against the Ducks. After one goal in her first 12 games in college soccer, the German freshman now has four in the last five games.

F Alexa Spaanstra, Virginia – One of college soccer’s best freshman played a huge part on UVA’s ACC tournament quarterfinal win. She scored the equalizer against Louisville, and then assisted on the winning goal as they edged it 2-1 at home.

F Catarina Macario, Stanford – Her scintillating form continued over the past week, as Macario grabbed both goals in Thursday’s 2-0 win at Washington. She one-upped herself on Sunday, scoring a spectacular goal (below) in a 1-1 draw.

F Alex Thomas, LSU – If LSU nabs an at-large bid in the tournament, a lot of that will come down to Thomas’ play the past few weeks. The senior forward setup a goal in a 2-1 win over Mississippi State. She tacked on a hat trick, including the winning goal in overtime to secure a win in the SEC tournament on Sunday.