Women’s Team of the Week: November 3 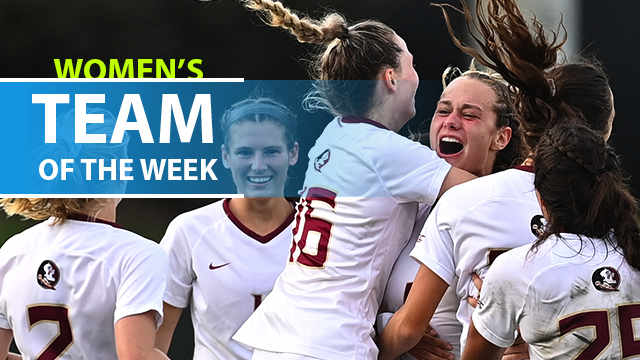 The ACC season wrapped up over the past week, with teams managing to play through to the pandemic with a certain level of success.

Jaelin Howell helped to make sure that Florida State finished its eight-game stretch with a perfect 8-0 record.

Howell recorded a last-gasp winning goal against Duke on Thursday, before helping her side lay the platform for a 2-0 victory versus Clemson on Sunday. Freshman forward Jody Brown tallied the goals in the win over the Tigers, as Howell nabs the latest Player of the Week nod.

With 12 second left Jaelin puts it in the back of the net on a Yuji corner!#OneTribe pic.twitter.com/5IfFcfB1Ot

Check out some of the other top players from the past week of action in women’s Division I soccer.

Team of the Week: October 26-November 1

GK Savannah Madden, Texas: A big 10-save effort from Madden helped the Longhorns secured a narrow 1-0 win over Baylor at home. It was a much-needed win for Texas.

D Mia Gyau, Duke: Gyau the entire 90 minutes in both games this past week for the Blue Devils as Duke won 3-1 victory at Miami. Duke did lose 1-0 on Howell’s last-gasp goal, but Gyau was outstanding on defense for the Blue Devils. She was also able to push forward when available to get the offense going.

D Karlina Sample, Texas A&M: The center back anchored a 2-0 win against Alabama, completing 82% of her passes while aiding the team’s shutout.

M Claudia Dipasupil, Tennessee: After scoring a great goal from distance in a 2-1 win over Florida, Dipasupil’s set piece delivery created the winner as the Volunteers picked up a massive road victory.

M Jaelin Howell, Florida State: After a stint with the U.S. women’s national team, Howell helped the Seminoles wrap up a perfect 8-0 season in the shortened season. She scored the winner on Thursday against Duke, and then helped lock down Clemson to pick up two wins in four days.

M Enzi Broussard, West Virginia: The left-sided player setup both West Virginia goals in a big 2-1 win against Kansas, capping a strong performance. Broussard completed 83% of her passes and 53% of 15 dribbles.

F Anna Podojil, Arkansas: Another strong effort from Podojil underlined her side’s 2-1 win against Auburn. She scored a goal and setup another, leading the line once again.

F Rebecca Jarrett, Virginia: There were goals galore in Virginia’s road games at Boston College and Syracuse over the past week. Jarrett scored the first goal in a 2-1 win over the Eagles, and then tallied what turned into the game winner versus Syracuse on Sunday. Jarrett also provided an assist for teammate Alexa Spaanstra’s goal.

F Tori Powell, Virginia Tech: The Hokies secured a spot in the ACC tournament with a pair of wins in the last week of action. Powell played a big part in wins against Wake Forest and Boston College. She scored twice and chipped in an assist last Thursday against the Demon Deacons, and setup one of the goals in a 3-0 victory over the Eagles.