Women’s Team of the Week: November 6 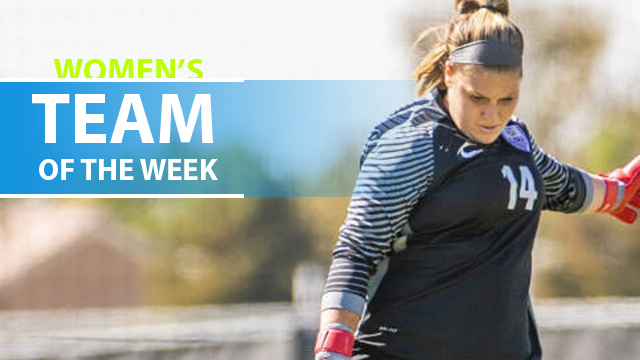 When the SEC tournament started, LSU looked like the team potentially on the bubble when talking about an at-large bid.

Fast-forward to Selection Monday, and the Tigers know their name will be called.

A shootout win last Tuesday against Tennessee kicked things off, before advancing to the SEC title game with a 1-0 victory over South Carolina. LSU then capped off their time in Orange Beach with a 4-1 shootout win against Arkansas to go dancing.

Goalkeeper Caroline Brockmeier, with her play in all three games, is the TopDrawerSoccer Player of the Week. Brockmeier stopped two penalties against the Volunteers, had four saves against the Gamecocks and then saved one in the shootout against the Razorbacks.

Check out the other top performances from the Women’s DI week below.

Team of the Week: October 29-November 4

GK Caroline Brockmeier, LSU – The SEC tournament MVP’s performances over the past week played a big role in her side coming away with the first conference tournament title in program history. And even more importantly, a stress-free Selection Monday.

D Carissa Sanders, North Texas – The Mean Green traveled to Norfolk, Virginia, and came away with the C-USA tournament title. Sanders played every minute and scored a goal against Rice, played 110 minutes in a 1-1 shootout victory against Louisiana Tech, and backstopped the title game win over Southern Miss.

D Olivia Sheppard, Princeton – With a 90-minute shift and 1-0 win against Penn, the Tigers clinched a share of the Ivy League crown and a spot in the NCAA tournament that comes with it. The defender helped limit the Quakers to just four efforts on target.

D Kelli Swenson, Wisconsin-Milwaukee – It’s been a banner season for Swenson, the Horizon League Defender of the Year. She picked up tournament MVP honors after scoring the game-winning goal in Sunday’s 1-0 win against Cleveland State to secure the team’s at-large bid.

D Easther Mayi Kith, West Virginia – A dominant weekend at the Big 12 tournament saw the Mountaineers win without conceding a goal. She played the full 90 minutes in the victories over Texas and Baylor.

M Dana Fujikuni, Long Beach State – The Big West midfielder of the year delivered in the conference tournament, scoring the winner against UC Davis and tacking on an insurance goal in Sunday’s tournament championship.

M Jordan DiBiasi, Stanford – With Catarina Macario getting a weekend off, DiBiasi stepped up in a huge way for the Cardinal. She scored four goals in two games, including the winning goals over California and Arizona State, as Stanford secured the Pac-12 title.

M Shay Johnson, Abilene Christian – Three wins in a week secured Abilene’s spot in the NCAA tournament, with Johnson a central figure in the Southland Tournament. Johnson scored in two games, including the winning goal against Central Arkansas.

F Maddie Pokorny, Saint Louis – It was a huge weekend for Pokorny, who scored four goals in the Atlantic 10 semifinals and final. That included a hat trick in the final, a 5-1 win against VCU.

F April Bockin, Minnesota – With two goals in Friday’s Big Ten semifinal, Bockin punched Minnesota’s ticket into Sunday’s final. There, they were victorious on spot kicks, with Bockin converting hers to secure an upset win over Penn State.

F Caitlin Farrell, Georgetown – A sensational season continued for Farrell over the week, as the senior propelled the Hoyas to two more wins and the Big East tournament title. She scored and setup another in a 3-1 win against Xavier, and the winner in Sunday’s 1-0 title win over Butler.