Women’s Team of the Week: October 27 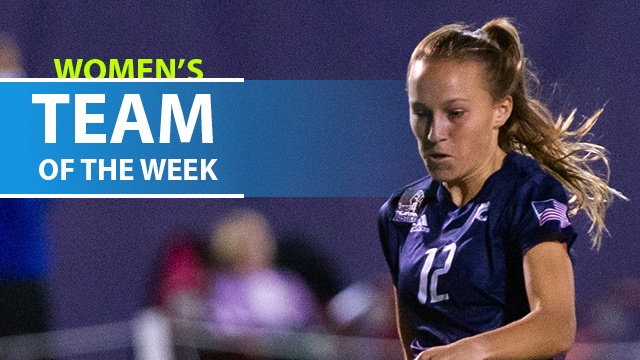 While the likes of the ACC, Big 12 and SEC garner most of the attention in the truncated fall season, the Sun Belt is also almost at the end of the 2020 campaign.

Freshman Kailey Littleford powered South Alabama to a first-place finish in the Sun Belt’s East Division. The first-year forward tallied two goals on the road against Georgia State in a 3-0 win that clinched the crown. On Friday night, she also assisted on the game-winning goal versus Georgia Southern, earning the latest Player of the Week nod.

Check out some of the other peak performances from the past week of college soccer action.

GK Sarah Fuller, Vanderbilt: Seeing action for just the first time in her career, the senior picked up her first shutout with a three-save effort in Vandy’s 1-0 win against Georgia.

D Sutton Jones, South Carolina: The Gamecocks continue to roll, winning their fifth straight game of the season with a 4-2 win against a depleted Florida. Jones scored twice, becoming the first defender to notch a brace since Taylor Leach in 2014.

D Abby Allen, North Carolina: Another lockdown defensive effort from North Carolina led them to a 1-0 win in a non-conference matchup against Duke. While the Blue Devils had some success in the midfield, the freshman from Texas ensured the danger was minimal, limiting Duke to just three shots on goal.

D Kim Rodriguez, Oklahoma State: The Cowgirls returned to their winning ways with a 2-0 victory against Texas. Rodriguez helped secure the shutout at the back, assisting on one of the goals.

M Emily Gray, Virginia Tech: Competing in a non-conference match against Navy, Gray assisted on both Hokie goals as they picked up a third win of 2020, a 3-1 win against the Patriot League side.

M Camryn Dyke, Notre Dame: The central midfielder helped to keep a shutout against Louisville as the Irish picked up an important 1-0 win. She converted the winning penalty in the second half and completed 83% of 63 passes attempted.

M Sarah Sodoma, Arkansas State: A penalty kick in the first half from Sodoma was all that Arkansas State would need, as they cruised to a 3-0 win against Louisiana. She caused trouble on the second goal, as her cross was turned into the net by a Louisiana defender.

M Kayla McKeon, Arkansas: The senior cracked open the scoring in a 2-1 win against Mississippi, playing 84 minutes in the triumph. It marked a return to winning ways for the Razorbacks after last weekend’s defeat to South Carolina.

F Grace Collins, TCU: Trailing 2-0 on the road at Kansas State, Collins helped to jump start TCU’s rally, as they bounced back for a 3-2 win. Collins scored the winning goal in overtime and was credited for an assist on the opening TCU tally.

F Lauren Geczik, Texas A&M: Two goals off the bench for Geczik propelled the Aggies to a 3-1 win against Tennessee.

F Kailey Littleford, South Alabama: Combing international and domestic players to find success in the Sun Belt, Littleford has the look of a local star for the program after her excellent week.