Women’s Team of the Week: September 3 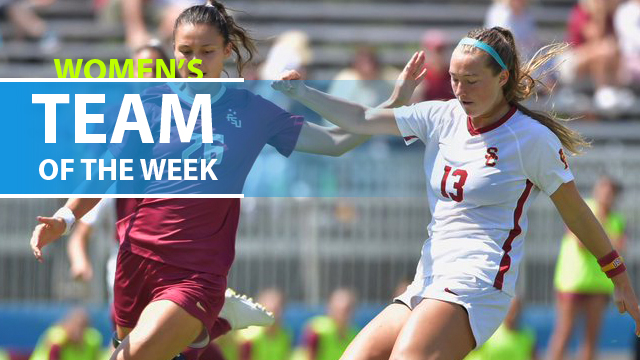 One of the highlights of the second week of the women’s college season was Florida and Florida State making the trip to California, for games against Pac-12 sides UCLA and USC.

It was the Pac-12 side that emerged as the big winners, as the pair picked up two wins apiece against the visiting competition.

Previous Teams of the Week: Aug. 27

A huge part of the success for USC, which defeated Florida 3-1 and Florida State 3-2, came from Tara McKeown’s ability to score and create goals. After scoring goals in both of USC’s opening games, she scored twice against Florida, and then added two more, while also assisting on the game-winning goal against FSU in overtime.

Below is the latest Team of the Week.

GK Olivia Camera, San Francisco – Competing in three games, wins over Hawaii, San Diego State and Illionis, Camera made 12 saves over that stretch. She picked up a pair of shutouts in the latter two wins as well.

D Meaghan Nally, Georgetown – The senior defender anchored a pair of shutouts. First, she helped the Hoyas to a 0-0 road draw against Duke last Wednesday. Back home on Sunday, Nally and the Hoya defenders blanked Bucknell on the Hilltop.

D Niamh Nelson, Louisville – Nelson logged every minute across two matches, both shutout wins against Saint Louis and Eastern Michigan. She setup the game-winning goal in a 1-0 defeat of SLU.

M Sam Coffey, Penn State – Making a long trip from State College to the West Coast, Coffey helped her Penn State side pick up two wins. She scored and assisted in a 3-1 win against Long Beach State, and scored the winning goal in the team’s second game against Loyola Marymount.

M Jessie Fleming, UCLA – A brace from the full Canadian international was the difference against UCLA. She also logged the full 90 in a 2-0 win over Florida.

M Taryn Torres, Virginia – The offensive barrage in 2019 continued for Virginia over the weekend, which put eight past East Carolina and West Virginia. Torres didn’t pop on the score sheet in the same ways as some of her teammates, but setup one of Diana Ordonez’s four goals and help the team dominate both games.

F Haley Hopkins, Vanderbilt – Another program that enjoyed a stellar road trip, Vanderbilt secured a pair of 1-0 wins against UC Irvine and Pepperdine. Hopkins scored the winning goals in both, once again in fine form this season.

F Abby McNamara, Wake Forest – A junior forward off to a strong start this season, McNamara nabbed what turned out to be the winning goal against Santa Clara last week. She followed that up with another tally in a comfortable 3-0 win over Charlotte.

F Tara McKeown, USC – A flying start to the season for McKeown has the junior on six goals in four games, which is equal to her career high set in the fall of 2018 as a sophomore. She’s thriving early on playing higher up the field with Penelope Hocking.

F Catarina Macario, Stanford – Right up there with McKeown when it comes to a player of the week candidate, Macario dropped four goals and three assists at home against Penn and San Jose State.