Women's Team of the Week: August 27 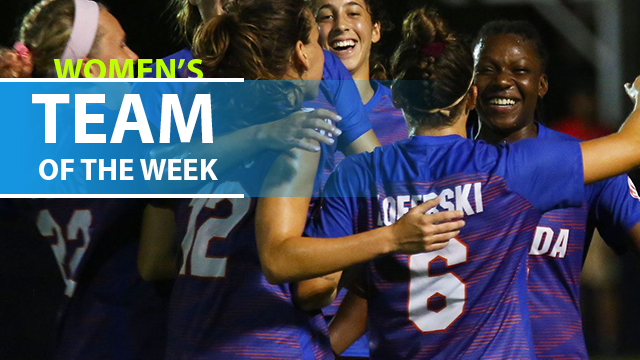 One program looking to bounce back this season enjoyed a strong start to the Division I season.

The first victory was secured in come-from-behind fashion against Florida Atlantic. After conceding the opening goal, Player of the Week Deanne Rose tied the game. When FAU equalized with a few minutes to go, Rose scored again to secure a 3-2 victory.

Facing a big road test on Sunday against South Florida, Rose scored and setup another goal in a 2-0 win, despite being outshot 20-4 on the night. The Canadian international missed a big chunk of last year on international duty, so her immediate impact is significant for Florida’s bounce back chances.

Big tests lie ahead – including this weekend against USC and UCLA – but it’s the strong start needed for the Gators.

See who joins Rose on the first Women’s Team of the Week for the 2019 season below.

GK Zoe Clevely, Pepperdine – After not making a save in Pepperdine’s 3-0 win against UC Riverside, Clevely helped ensure the Waves drew 0-0 against Texas A&M’s strong attack. She made seven saves on Sunday in a 0-0 draw.

D Malia Berkely, Florida State – After helping the defending champs keep a clean sheet in their 2-0 opening win over TCU, Berkeley scored the game-winning goal with a thunderbolt from distance in Sunday’s 1-0 overtime victory against Wisconsin.

D Julia Bingham, USC – The senior defender anchored the USC back line to pair of shutout victories in Hawaii. The Pac-12 side beat Hawaii 3-0 and San Francisco by a 2-0 score.

M Julia Grosso, Texas – Playing just a single game over the weekend, Texas held off Gonzaga by a 4-3 score at home. Grosso scored twice and setup the game-winning goal in the 81st minute.

M Mikayla Colohan, BYU  – On the road to play a pair of SEC foes, Colohan scored both game-winning goals in wins over Alabama and Mississippi State.

M Samantha Dewey, Xavier – A four-goal effort against Murray State led the Big East side to a wild 4-3 victory. It was a two-win opening week for Xavier, as they also beat Bowling Green.

F Catarina Macario, Stanford – Macario almost single-handedly defeated Penn State on Friday night, scoring a scintillating goal and combining for the winner. The only thing standing between her and a stellar season is health.

F Deanne Rose, Florida – A big season for Rose could mean great things for Florida. If her three goals and one assist over the weekend are a sign of what’s in store for her this season, it bodes well for the Gators.

F Isabella D'Aquila, Santa Clara – The top recruit was one of several freshmen to enjoy a stellar start in 2019 over the weekend. She scored her first college goal against Texas A&M, and then scored twice and added an assist against Oregon in a 4-1 victory.