Women's Team of the Week: September 5 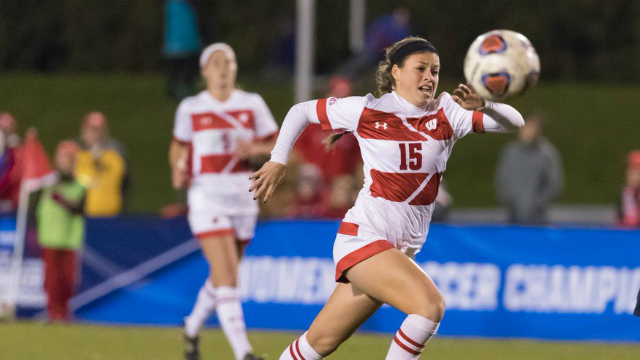 Big goals at the right time can provide the chance to spring an upset.

Last week, Wisconsin forward Dani Rhodes found herself at the right place at the right time, and it was her lone goal that propelled the Badgers to a 1-0 win against Virginia at Klockner Stadium in Charlottesville.

It wasn’t just the winner in Charlottesville that earns Rhodes the TopDrawerSoccer.com Player of the Week nod. She scored what turned out to be the winning goal in a 3-1 win against William & Mary, while also chipping in an assist.

Find out who joins Rhodes on the latest Team of the Week below.

Team of the Week (August 28-September 3)

GK Mikayla Krzeczowski, South Carolina – Facing a relatively strong Notre Dame attack, Krzeczowski was at her best, making nine saves in 1-0 victory against Notre Dame on Friday. She also made four on Sunday, a 2-1 win over Michigan.

D Mikaela Symanovich, Princeton – The Tigers are off to a strong start in 2017, punctuated by a win on Saturday against NC State down in Raleigh. Symanovich played the full 90 minutes, scoring the insurance goal in a 2-0 victory.

D Addisyn Merrick, Kansas – It was a big win for Kansas on Sunday, as the Big 12 side downed the reigning national champions USC by a 2-1 score line. Merrick played every minute in that win, as well as a 2-0 victory against Colorado College on Friday night.

D Taylor Sekyra, Washington – The upsets continued over the past week, with Washington shutting out Florida 1-0 on Friday night. Sekyra was imposing at the back, going the full 90 to help keep the clean sheet.

D Paula Leblic, Oregon State – A sophomore defender for the Beavers, Leblic scored the game-winning goal and played well at the back as the Pac-12 side shutout San Francisco last week.

F Jessie Ray, Seattle – While Seattle was idle over the weekend, Ray picked up MVP honors at the Outrigger Classic in Hawaii the weekend prior, as she scored a goal in a win over Hawaii.

F Caitlyn Kreutz, UNLV – Kreutz provided the bulk of the offense in UNLV’s 2-1 win over UC Davis, assisting on the opener and scoring the eventual winner.

F Julie Gavorski, Cincinnati – Another program off to a bright start in 2017, Cincinnati upset Big Ten side Northwestern over the weekend thanks in large part to Gavorski. The attacker scored twice in a come-from-behind win, as the Bearcats are off to an unbeaten 4-0-1 start to the season.

F Martha Thomas, Charlotte – It was a big weekend for Thomas, who exploded for two goals and two assists in Charlotte’s big 6-0 victory against Gardner Webb. She followed that up with a goal in another win over Western Carolina on Sunday, as she continues to close in on a record for career points in program history.

F Dani Rhodes, Wisconsin – Rhodes’ offensive outburst also took her to the top of the team’s scoring lead, with three so far on the season, not to mention a 5-1 start to the season for Wisconsin.